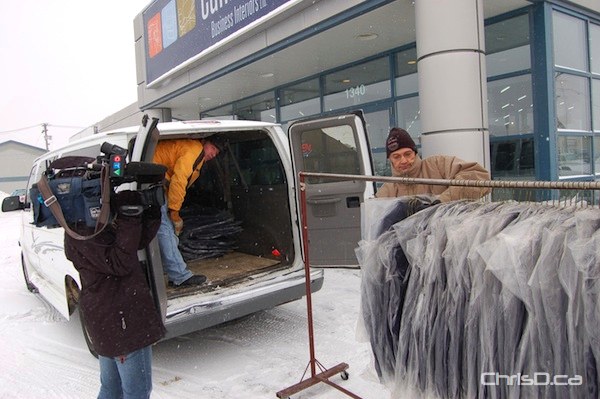 Staff from Siloam Mission load up a portion of the jackets donated into their van on Friday, January 21, 2011. (HANDOUT)

A local business will donate 900 winter jackets to Siloam Mission in the wake of Winnipeg’s latest cold snap.

Bob and Rob Cunningham from Cunningham Business Interiors will turn over the jackets today, making it one of the largest jacket donations Siloam has ever received.

“Nobody should have to freeze in Winnipeg, especially not the most vulnerable,” the Cunninghams said.

The Cunninghams purchased 1,250 jackets in a sister company. They had already sold 350 when the temperatures plummeted in Winnipeg earlier this week.

“We heard on the news that Siloam was looking for donations of warm clothes to meet the needs of their guests,” said Bob Cunningham.

Due to the cold, Siloam Mission has been handing out more sweaters, jackets, toques, mitts and long underwear than usual.