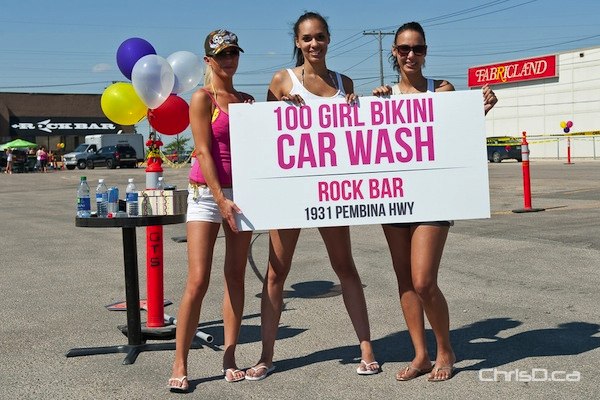 A group of 100 bikini-wearing girls held a charity car wash on Saturday, August 13, 2011 in support of their recently-paralyzed friend. (TED GRANT / CHRISD.CA)

A group of 100 girls gathered Saturday at a Pembina Highway bar to hold a fundraising bikini car wash, in support of one of their friends who is now wheelchair-bound after a swimming pool accident.

Dozens of cars lined up to get a wash during the six-hour event. Not surprisingly, the majority of those making donations were men.

The group had the idea after their close friend dove into the shallow end of a swimming pool three weeks ago, leaving him paralyzed from the waist down. They hope he will one day walk again, but in the mean time are helping him cope with his new life. The friend, who remains unnamed citing privacy concerns, will have to get his home retrofitted for wheelchair access. The money raised on Saturday will help him to make the appropriate alternations needed for this, as well as help cover his physiotherapy bills.

Organizers did not immediately have a final total of how much they had raised, but close to 1,000 people committed to attending on Facebook and making a $10 contribution.