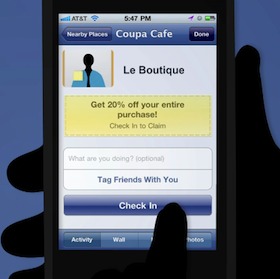 Starbucks customers are heavy Facebook users, or maybe it’s the other way around. Nevertheless, Starbucks tops the list of one of the most frequent places Facebook users check in to.

Similar to Foursquare, Facebook Places has gained traction in recent months as the go-to tool to let your friends know where you are and what you’re doing.

The eatery has 17,000 locations, which helps it to become the top destination popular with smartphone users.

Coming in at second was Buffalo Wild Wings, followed by Chili’s. Oddly enough, McDonald’s — who has 32,000 locations worldwide — came in fifth.

It’s unclear how many check-ins each establishment received.

— With files from Mashable.com