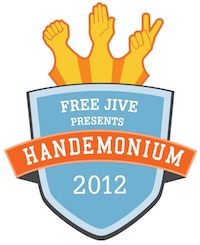 A serious rock, paper, scissors tournament will have worthy participants (and their hands) competing against each other on September 29.

Handemonium is Winnipeg’s attempt to break the Canadian record for participants in a rock, paper, scissors tournament.

Approximately 1,500 people will fill Shaw Park for a series of games, with the chance to win prizes and support a charitable cause at the same time. Net proceeds from the event will be donated to Colon Cancer Canada.

The tournament will be broken into three classes based on the amount of donations raised by each participant. Registration is open at Handemonium.ca.

A preliminary mini-tournament will be held Thursday, August 30 at the Pony Corral at 1700 Pembina Highway beginning at 7:30 p.m.