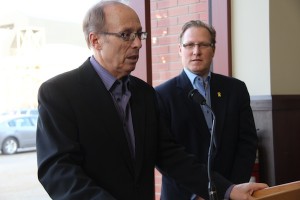 The city is spending $30 million to make improvements to traffic flow in the Polo Park area.

“The Polo Park area is one of the busiest retail areas in Winnipeg,” Katz said. “All the successful development in this area means that people drive here from all parts of the city. With new development coming shortly, it’s important that we get traffic improvements underway as soon as possible.”

The site of the old Canad Inns Stadium will become a mixed-use development site anchored by Target after the city sells off the land for $30.25 million. The addition of the U.S. retailer is expected to bring traffic from all corners of the city — similar to the attraction of IKEA in Winnipeg’s southwest corner.

The city will consult with area businesses and residents on where specific upgrades should be made.

Last spring, CAA Manitoba named St. James Street as the “worst road” in Manitoba after a four-week campaign to solicit feedback from its members on infrastructure.

“We are happy to see this as a priority,” CAA said in a tweet following today’s announcement.