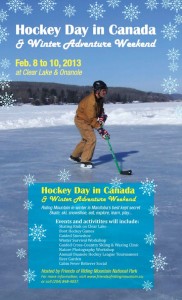 Hockey Day in Canada is February 8-10 at Clear Lake. Click the poster to enlarge.

Skaters will lace up in Clear Lake next month for the third annual Hockey Day in Canada.

Part of the Winter Adventure Weekend, the townsite in Riding Mountain National Park and nearby Onanole, Manitoba will play host to the festivities February 8-10.

“The first year we held Hockey Day in Canada the event was planned basically on the spur of the moment,” said Onanole Rec Centre president Scot Shellborn. “We weren’t sure how it would be received. Then 500 people attended. It was amazing to see such a great response. We had to keep it going because everyone had so much fun.”

The Onanole Hockey League men’s tournament will kick things off February 8 and run through the 9th.