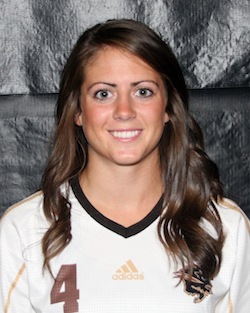 The 22-year-old is one of 20 women on the national roster announced Thursday by Canadian Interuniversity Sport (CIS). Lafreniere will represent Canada in Russia July 6-17 and completed her fifth and final season at Manitoba in the 2012-13 season.

“I am humble by the invitation to play on the national team. Soccer has been a really big part of my life for the last 15 years and to be selected for this team is a real honour,” Lafreniere said in a statement. “My selection is a tribute to my coaches and all those who have supported me during my soccer journey.”

This will be Lafreniere’s first time in her career to represent Canada at a Summer Universiade and only the second Manitoba Bisons women’s soccer player named to a Canadian Universiade roster. Former Bison Desiree Scott represented Canada in 2007 and 2009.