Home » News » The Guess Who Honoured on New Postage Stamp

The Guess Who Honoured on New Postage Stamp 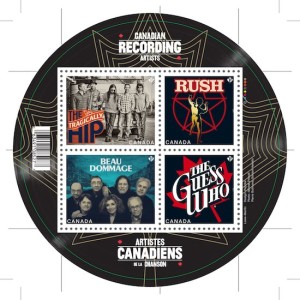 Canadian bands Beau Dommage, Rush, The Guess Who and The Tragically Hip will be spotlighted in the stamp series created to honour musical legends. (CANADA POST / CNW GROUP)

An iconic Canadian rock band that got their start in Winnipeg is being honoured on a new postage stamp.

Canada Post will include The Guess Who as part of the Canadian Recording Artist stamp series. The stamps will be released in July and also feature Beau Dommage, Rush and The Tragically Hip.

“This year’s series features Canadian bands that have shaped the music industry in Canada,” said Jim Phillips, director of stamp services for Canada Post. “Each band has achieved national acclaim, along with international radio air-time and extensive tours.”

The Guess Who got its start in Winnipeg in 1962 when singer/songwriter Chad Allen joined forces with Jim Kale, Randy Bachman, Garry Peterson and Bob Ashley to form Chad Allen and the Reflections.

The stamp series will be available from Canada Post retail outlets starting July 19 or online at CanadaPost.ca/shop.