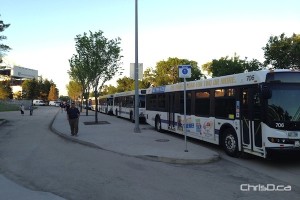 Winnipeg Transit buses wait outside Investors Group Field on Wednesday night to shuttle fans back to their vehicles. (CHRISD.CA)

The Winnipeg Blue Bombers admitted they dropped the ball Wednesday when it came to managing how fans would get to and from Investors Group Field.

Faced to answer questions from an eager media gauntlet on Thursday afternoon, Blue Bombers president and CEO Garth Buchko and vice-president and COO Jim Bell apologized to fans and admitted it will take some time to iron out the kinks.

Fans attempting to arrive to last night’s Bombers-Argonauts pre-season game expressed their anger on social media while stuck in traffic, sometimes several kilometres long stretched up Pembina Highway and Bishop Grandin Boulevard. One tweet reported a fan still waiting at Assiniboia Downs for a shuttle to the stadium at 9 p.m.

Students and staff had to vacate the University of Manitoba’s Fort Garry campus by 5:30 p.m. so the parking plan could be put into place. About 1,500 designated spots were reserved for university business, but the demand outweighed the availability, especially with summer classes in effect. The football club said it will hold discussions with the U of M on the possibility of allowing fans access to the campus sooner for future events.

Winnipeg Transit was one of the main forms of transportation promoted when the Bombers unveiled their parking plan in April. Director Dave Wardrop joined Buchko and Bell to answer questions from the city’s perspective, saying he expected roughly 5,200 people to take the bus, while 8,500 decided to hop on board. Wardrop said a future idea may be to designate temporary diamond lanes by taking one lane of traffic out of service for buses for game days and other events. Many fans who rode in on the bus decided to get off early as Winnipeg Transit buses were at a standstill along University Crescent.

Similar woes were experienced for cyclists, who had trouble finding a spot to secure their bikes. The stadium’s bike corral can accommodate 400 bikes, while 700 showed up to be valeted on the stadium’s north side.

Further discussions between the Bombers, city and U of M will take place next week before the June 22 Taylor Swift concert and June 27 home opener when the Bombers host the Montreal Alouettes.