High Winds the Cause of CP Derailment in Poplar Point 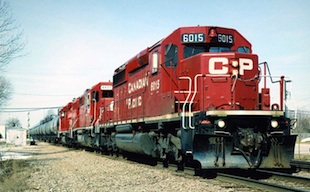 High winds were the cause of a train derailment in Poplar Point, Manitoba last July.

The Transportation Safety Board of Canada on Tuesday released its findings into the July 29, 2012 derailment of the CP freight train, saying a delay in notification to the train crew about severe weather in the area led to the crash.

The train departed Winnipeg and began travelling westbound to Brandon on CP’s Carberry subdivision when the accident occurred at around 6 p.m.

The TSB says cars were double stacked with empty containers when it was travelling at around 43 km/h. Twelve cars of the 56 on the track blew over as a result of the strong wind gusts and rain.

CP’s crew received a radio call about the weather, but it was too late to take the necessary precautions. The railway has since taken steps to amend its severe weather warning procedure to ensure that train crews are aware of the risk of encountering high winds.