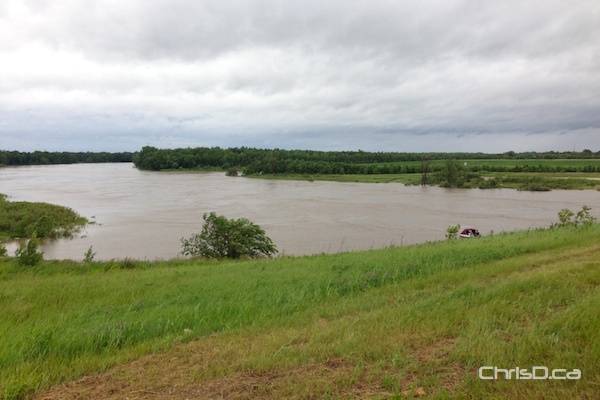 The view from the Red River Floodway control structure on Sunday, June 29, 2014. (CHRISD.CA)

The province is putting the Red River Floodway into operation after the weekend’s torrential rainfall, rising levels on rivers across Manitoba.

The gates will be lifted Tuesday at 9 a.m. to protect homes in Winnipeg and prevent basement flooding.

“It’s been one heck of a weekend in terms of weather,” Emergency Measures Minister Steve Ashton said during a conference call.

Ashton says the floodway will be operating at a minimal stage as levels on the Red River prepare to rise to between 17.4-17.7 feet (James Avenue) in the next few days.

Outside of the city, the Portage Diversion is already in use with flows of 1,700 cfs. The Lake St. Martin emergency channel will also be operated within the next 48 hours, with flows of 5,600 cfs expected.

Winnipeg received 49 mm of rain, with the majority hitting the Westman area, including Brandon at 125 mm.

Ashton added that significant recovery costs will be associated with the flashing flooding seen across Manitoba. Estimates will only be known after the province can assess damage from affected municipalities.

The list of municipalities declaring a state of local emergency in Manitoba has risen to 31, including:

← Previous: What to Do on Canada Day in Winnipeg Next: Jets Re-Sign Chris Thorburn to $3.6M Deal →
Tags: Flooding | Manitoba | Red River | Winnipeg