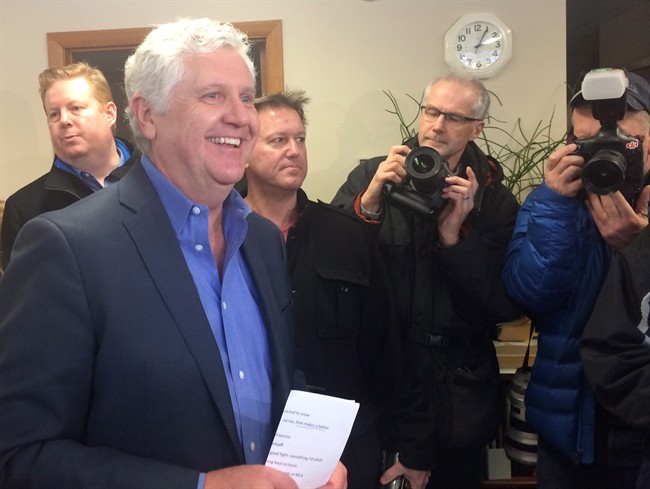 Manitoba Justice Minister Gord Mackintosh announced Friday, Jan. 29, 2016 he will not run for re-election. He is the latest high-profile New Democrat to leave politics with a provincial election looming April 19. (THE CANADIAN PRESS/Steve Lambert)

Justice Minister Gord Mackintosh announced Friday he will not seek re-election — putting an end to a 23-year political career — despite having been nominated to run again in his St. John’s constituency last spring.

Mackintosh, 60, said he changed his mind during a walk with his wife Margaret at a justice ministers conference earlier this month in Quebec City.

“We took a long walk, and wouldn’t you know, it started to snow,” he said, a reference to Pierre Trudeau’s 1984 walk in the snow that preceded his resignation as prime minister.

Mackintosh has been a cabinet minister since the NDP came to power in 1999 and has held other portfolios including conservation and family services. He was seen as a reliable fixer in the party. He was handed the family services portfolio in 2006 at a time when the province’s child welfare system was in turmoil following the deaths of some children in care.

His departure comes two days after another senior New Democrat, former finance minister Jennifer Howard, announced she is leaving politics as well. Like Mackintosh, Howard had been nominated to run again in a long-held NDP seat.

The NDP has lagged in opinion polls. Several surveys over the past two years have suggested NDP support is 20 points or more behind that of the Opposition Progressive Conservatives.

Political analyst Paul Thomas said the resignations of senior party members is another blow to an already troubled party.

“It damages the image and reputation of the party,” said Thomas, a professor emeritus at the University of Manitoba.

“It probably reflects badly, in the eyes of many people, on (Premier Greg) Selinger’s ongoing leadership of the party, that he couldn’t persuade or cajole people into staying.”

Selinger, standing beside Mackintosh on Friday, said polls are only one side of the story and the NDP is attracting new candidates.

“The other side of that story is that when people step up — why would they step up if polls are low? They’re stepping up because they believe in the policies and the things we’ve accomplished.”

The NDP plummeted in opinion polls after raising the provincial sales tax to eight per cent from seven in 2013. The following year, five senior cabinet ministers openly challenged Selinger’s leadership.

Selinger barely survived the ensuing leadership vote. Mackintosh took no side in the leadership crisis.

Several New Democrats have already announced they will not seek re-election. Former cabinet ministers Theresa Oswald, Erin Selby and Stan Struthers, who along with Howard, challenged Selinger’s leadership, are leaving. Jim Rondeau and Nancy Allan, longtime ministers who were demoted from cabinet by Selinger in 2013, have also decided not to run again.