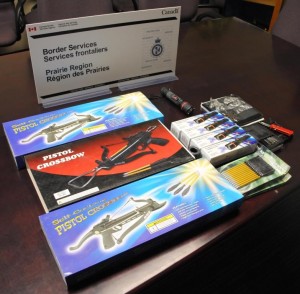 Items seized by the Canada Border Services Agency in 2015. (CBSA)

WINNIPEG – Weapons disguised as cutlery and a shipment of a chemical used to make the date-rape drug were among the 300 contraband seizures made at the Winnipeg airport by the Canada Border Services Agency last year.

The agency says in a news release summarizing CBSA activity for the year that in August, customs officers seized 35 prohibited weapons in a shipment destined for an Alberta address.

In June, officers searched a shipment from China and found material that is used in the production of the date-rape drug.

The importer was subsequently arrested by Winnipeg police.

Customers officers also arrested a U.S. man wanted for alleged possession and pandering of child sexual abuse imagery, and a Winnipeg man who eventually pleaded guilty to providing false information to the federal government on refugees.

“The CBSA plays a critical role in keeping weapons and drugs off the streets of Winnipeg by stopping them at the front line,” said Kim Scoville, director of the CBSA prairie region.

“The significant cases from last year are part of our officers’ diligent efforts to pursue these acts of criminality to protect our communities from sexual predators and fraudulent immigration activities.”