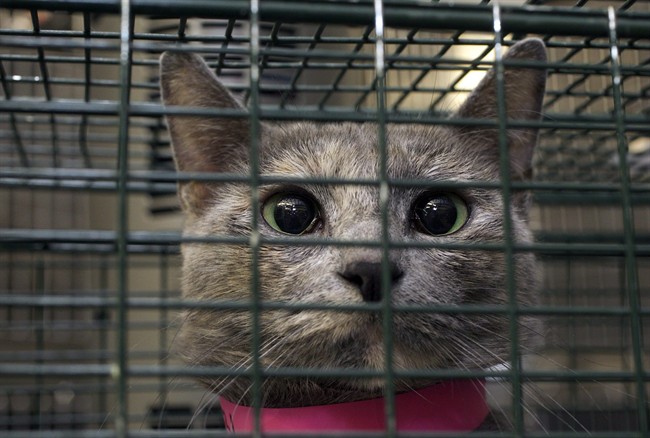 In this Friday, May 2, 2014 photo, a neutered cat named “Phoebe” peers out of her enclosure as she recovers at the new American Society for the Prevention of Cruelty to Animals (ASPCA) clinic at the Chesterfield Square shelter in South Los Angeles. (THE CANADIAN PRESS/AP-Damian Dovarganes)

The Winnipeg Humane Society is forging a new social media partnership in an effort to reunite more lost cats with their owners.

Working with Winnipeg Missing and Found Cat Watch (WMFCW) on Facebook, the WHS will support the group’s efforts in ensuring lost felines can return home.

“We are always connected with our phones and computers, so naturally they make a great tool to help more lost cats return home. At the same time, it also reduces the strain we sometimes feel with many incoming cats at one time.”

The partnership is part of the 30 Days of Gratitude campaign, where the WHS recognizes and shows appreciation for the groups and individuals who help The WHS raise funds, care for, and support over 8,500 animals each year.