By Joanna Smith and Kristy Kirkup, The Canadian Press 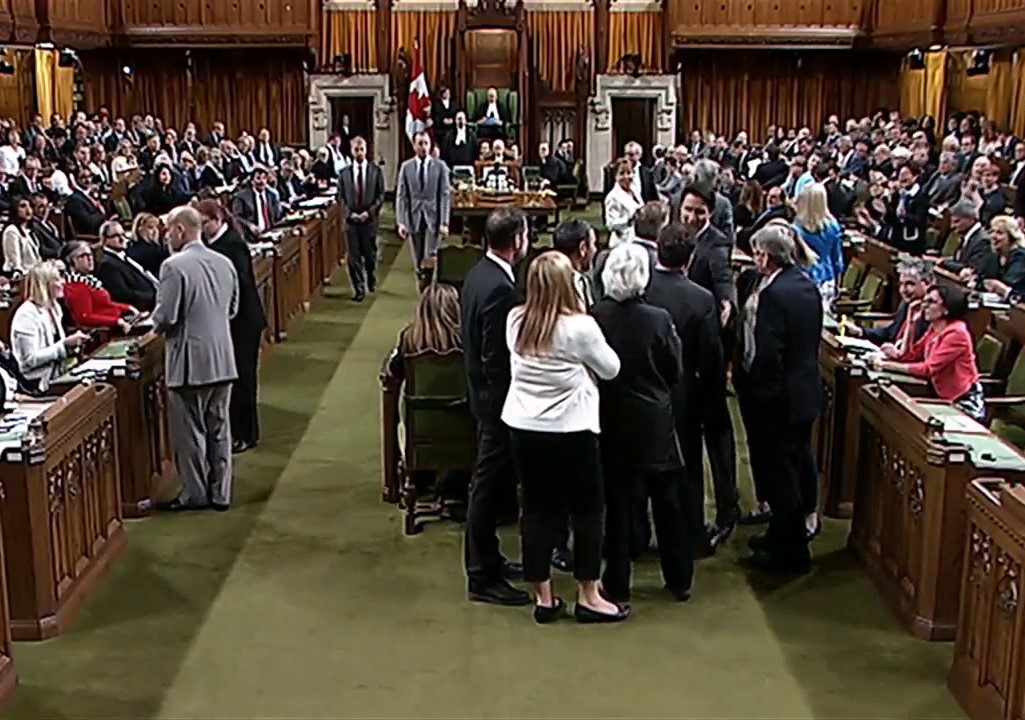 Canadian Prime Minister Justin Trudeau, face towards the camera left of centre of the frame, is shown near Opposition whip Gordon Brown in the House of Commons in Ottawa on Wednesday May 18, 2016. (The Canadian Press/House of Commons)

OTTAWA – The House of Commons erupted in pandemonium Wednesday as opposition MPs angrily accused Prime Minister Justin Trudeau of “manhandling” the Conservative whip and elbowing a female NDP MP in the chest prior to a key vote.

Quebec MP Ruth Ellen Brosseau said she was so shocked by the encounter, she had to leave the chamber as mayhem descended on the Commons floor, with Trudeau at one point in a face-to-face encounter with NDP Leader Tom Mulcair, MPs scrumming around them like kids witnessing a schoolyard tussle.

The incident – coming amid the superheated atmosphere of the doctor-assisted death debate – had MPs in an uproar as they shouted and pounded their desks in a display of antipathy rarely seen in the parliamentary chamber.

So this is what happened in the House of Commons just now. pic.twitter.com/oBtqDZlrqL

Reporters scrambled to witness the unfolding drama Parliament Hill, where political staffers exchanged their respective versions of events, even pantomiming their blow-by-blow accounts as they shared stories in the foyer.

Footage from the Commons television feed showed Trudeau wading into a clutch of MPs, mostly New Democrats, and pulling Opposition whip Gordon Brown through the crowd in an effort to get the vote started – a no-no in parliamentary procedure.

As Trudeau turns around to pull Brown through, Brosseau comes into view, discomfort evident on her face as Trudeau pushes past her, forcing her against an adjacent desk.

“I was standing in the centre talking to some colleagues,” Brosseau told the House after calm was restored. “I was elbowed in the chest by the prime minister and then I had to leave.”

“It was very overwhelming and so I left the chamber to go and sit in the lobby. I missed the vote because of this.”

New Democrat Peter Julian could barely contain his outrage, saying he’d never seen such behaviour in his 12 years in the House.

Trudeau issued an abject apology, even amid the catcalls and protests of the opposition benches, saying he was just trying to help the opposition whip get to his seat.

He never intended to hurt anyone, Trudeau insisted.

“I took it upon myself to go and assist him forward, which was I now see unadvisable as a course of action,” said Trudeau, who characterized his actions as “unacceptable.”

“I apologize for that unreservedly and I look for opportunities to make amends.”

Not good enough, Julian later complained. “He should have known that what he did was absolutely inappropriate.”

Trudeau’s apology was followed by a lengthy parade of indignant MPs getting up to express their outrage to the Speaker, describing a scene unlike anything they’d ever seen before in all their years as politicians.

At one point, Trudeau left to attend a photo-op with B.C. Premier Christy Clark and a reception for guests who were on hand for a different apology: Parliament saying sorry for the Komagata Maru incident off the B.C. coast in 1914.

During the former event, Trudeau looked serious and shaken as he rushed through a statement of welcome directed at Clark. For her part, Clark said he never mentioned the incident.

During the evening reception, Trudeau apologized to an audience of Sikhs for taking the spotlight away from the Komagata Maru.

“I’m going to apologize again for an incident in the House this evening that might take away a little bit in the news tomorrow, and for some people, the extraordinary celebration that today is, and the important momentous occasion that this day represents, not just in the story of Sikh and southeast Asian Canadians, but in the story of this country,” he said.

“For that, I truly regret.”

Tempers ran high in the Commons all week as the government pushed through a motion to limit debate on its controversial assisted-dying legislation, Bill C-14. It was that motion the members were gathered to vote on before the confrontation took place.

Speaker Geoff Regan could barely make himself heard as he tried to read the text of the motion on C-14. It was defeated by a margin of 172-137, although Brosseau wasn’t able to register her vote.

The acrimony was likely spillover from Wednesday, when the Liberals revealed their unpopular plan to change parliamentary procedures – an effort to wrest greater control over how and when things are done in the House of Commons, and stifle political gamesmanship.

Conservative MP Andrew Scheer, who sits directly across from Trudeau in the House, said he believes Trudeau became angry with the time it was taking for the vote to get underway.

“It was just so clear that he lost his temper,” Scheer later said, noting that the party whips usually wait a few seconds for MPs to get to their seats before beginning their procedural march into the chamber.

“He just popped up and ran over,” Scheer said.

“I could tell it was motivated by anger and by having lost his temper. It was very, very unfortunate.”

Green party Leader Elizabeth May, whose seat in the House gave her a ringside seat for the encounter, called for calm at one point – and suggested that the NDP MPs may have been milling about on the floor in order to delay the vote.

“There was some mischief; let’s face it; there was an attempt to slow down the vote, but it was innocent mischief,” May said to catcalls from her fellow opposition MPs.

“It was most unwise of the prime minister to attempt to move along the vote. But the second contact with my friend (Brosseau), which is certainly the one that was the most emotional for the member involved, was clearly, from my perspective … unintentional.”

She added: “He had not seen her behind him. That is the truth. Now you can like it or not like it, but nothing that happened here today reflects well on us.”

The Speaker concluded there was a prima facie case that Brosseau’s privileges as an MP had been breached, which means the encounter will be examined by an all-party committee.