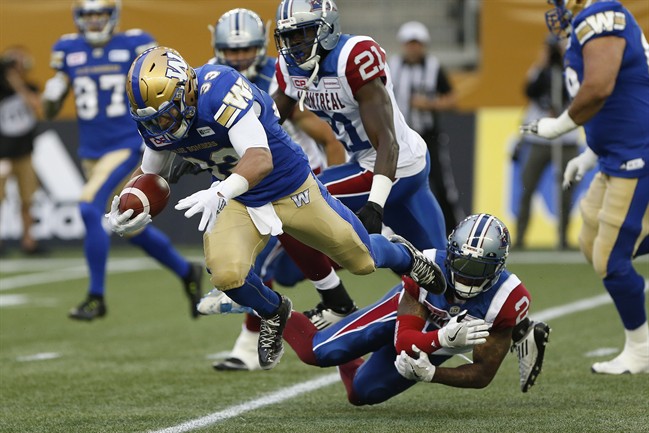 Despite Montreal Alouettes’ Jovon Johnson (2) getting a hand on Winnipeg Blue Bombers’ Andrew Harris (33), he can’t stop the running back during the first half of pre-season CFL action in Winnipeg Wednesday, June 8, 2016. (THE CANADIAN PRESS/John Woods)

WINNIPEG — Down by ten in the second quarter, the Bombers handed the ball to two quarterbacks who will be fighting for the same spot over the next two weeks. The results were explosive: Winnipeg roared off 30 straight points with Dominique Davis and Bryan Bennett at the helm, winning their preseason opener against Montreal in dominant fashion, 36-13.

“They don’t need to have it shoved in their face that it’s a battle, but they understand that three guys dress,” said head coach Mike O’Shea. “They both played well, made the plays they were asked to make and good for them. They’re competing and handling it extremely well.”

“I just went out there and tried to execute as best as I could, building off of camp, taking it one day at a time,” said Davis. “The receivers did a good job of getting off the press and beating their man, it’s my job to put the ball on the spot.”

Davis and Bennett will be dueling for third-string quarterback behind Drew Willy and Matt Nichols, who both saw early action tonight. Willy started, playing most of the first quarter and passing 3-for-6 for 52 yards, including a 32-yard bomb to Ryan Smith.

Between the backups, Davis got the first taste of success, leading Winnipeg to their first touchdown drive late in the second quarter. The 11-play, 70-yard drive was a good showcase for Davis’ running and short passing game, and it culminated with a Tim Flanders dive into the end zone.

Bennett, meanwhile, played late in the third and most of the fourth quarter, running for a touchdown on a drive propped up by two Montreal pass interference penalties, then passing for another – a 29-yard toss to Fred Williams.

On the other side of the ball, the starting defensive line looked promising for Winnipeg early. Two first quarter sacks – one by Jamaal Westerman – were the exclamation point, as Montreal would fail to score until their two touchdowns against Winnipeg’s second unit.

“It’s always good to come out with a win, it felt like everyone flew around and they were having fun,” said Westerman. “I thought we did a good job of communicating as a defence and we just have to continue to grow throughout the preseason and really, throughout the season.”

Montreal got their touchdowns on two passes, one from Kevin Glenn and the other from Rakeem Cato. With those two sitting, though, the Alouettes failed to generate good offence in the second half.

In the end, this game was a showcase for all the tough decisions Mike O’Shea will have to make in the coming days, including what the quarterback depth chart will look like. The first CFL cut-downs come on June 14, when rosters must be cut to 65. The final 46-man rosters must be decided by midnight on June 19.

As they edge toward the start of the season, the Bombers will conclude their warmup schedule in Ottawa on Monday, June 13 at 6 p.m. The real deal starts at home against these very Alouettes on Friday, June 24 at 7:30 p.m.