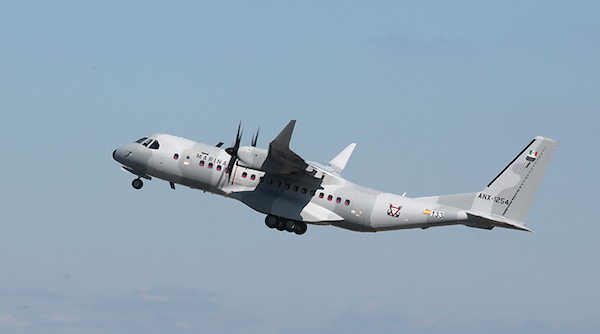 An Airbus C295W owned by the Mexican Air Force

An Airbus C295W aircraft will touch down in Winnipeg on Friday morning as part of a tour demonstrating its capabilities.

Airbus Defence and Space is hosting the tour, with additional stops in Saskatoon, Yellowknife, and Thunder Bay. Remote communities along the aircraft’s destination also include Resolute Bay, Churchill, Pickle Lake, and Kasabonika.

The C295W is touted for its robustness, reliability and versatility that make it perfectly suited for operations in Canada’s challenging environments.

The military plane is owned by the Mexican Air Force and will land at around 8 a.m.

← Previous: Bomber Fans Asked to 'Bring a Tin for the Bin' Next: 'Winnepeg' Jets T-Shirt Made by Company Licensed to Sell NHL Stock Shocker for Fan →
Tags: Air Travel | Winnipeg