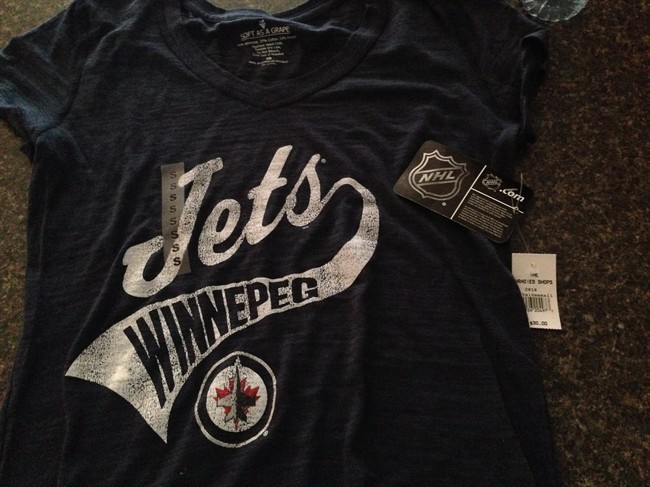 Heather Prevalnig’s t-shirt is seen in this undated handout photo. Prevalnig bought a Jets T-shirt, shown, at Winnipeg’s airport on her way home to B.C. and discovered too late that the city’s name was misspelled. (THE CANADIAN PRESS/HO, Heather Prevalnig ) 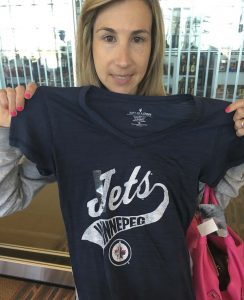 KELOWNA, B.C. – A lifelong Winnipeg Jets fan was shocked to learn she’d bought a team T-shirt with the city’s name misspelled as Winnepeg.

Heather Prevalnig, 33, said she paid $30 for the T-shirt at a Winnipeg airport store on her way home to Kelowna, B.C.

Her brother had been teasing her for days about her loyalties to her childhood hometown team.

Prevalnig, a recreation clerk with the City of Kelowna, said her dedication to the Jets began when she was a youngster playing minor hockey.

“I went to all the Jets games as a kid and I was part of the ’90s Save the Jets campaign and sold 50/50 tickets at Jets games in their old stadium.”

So she snapped a selfie holding the shirt and fired it off to him.

He immediately pointed out the spelling mistake.

Prevalnig couldn’t believe the error, especially because the T-shirt bore a tag with the NHL’s official logo.

The shirt was manufactured by a Wareham, Mass., company called Soft As a Grape, and owner Allen Katzen said an employee who made the error feels awful about it.

“It was an honest error from an employee and for some reason it didn’t go through a quality inspection like it should have,” Katzen said.

“It’s a serious situation, we made a mistake and we’re doing everything we can to rectify it. The shirts have been recalled and we’re reprinting them correctly.”

Katzen said 48 shirts were produced with Winnipeg spelled incorrectly and not all of them were sold.

Katzen said his company has had a licence to manufacture apparel for all NHL teams for about five years.

“We don’t have rights to sell into Canada, except for this one exception.”

Prevalnig said she has heard from the gift shop in Winnipeg, which has promised to “make it right.”

“I was really looking forward to wearing it and feeling pride about wearing it,” she said. “I have come to realize after moving to Kelowna that when you see somebody with Jets apparel it’s an instant connection, it’s an instant bond.”

Winnipeg Jets spokesman Scott Brown said it’s unfortunate that the manufacturer made the mistake on Jets merchandise, “but mistakes happen.”

“It’s really unfortunate that the mistake made it all the way onto the shelves and someone had to make the purchase and then discover it a little late.”

Brown said the Jets have alerted the NHL’s merchandising staff about the error.

— By Camille Bains in Vancouver with files from Beth Leighton.