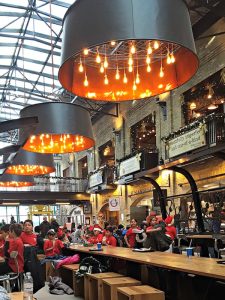 Simon’s Cuisine is a new addition to the Food Hall at The Forks.

WINNIPEG — Simon’s Cuisine is part of the snazzy new Food Hall at The Forks Market. Winnipeggers were out in droves on this particular balmy winter day and so finding a parking spot took a bit of patience. Simon’s delectable offerings made one forget about the extra effort. The new hall had a grand open feel, even though the seating is still food-court style.

Simon’s has been on my radar for a long time. I had intended to visit their original location on St. Mary’s Road and never got the opportunity.

Jose Sturym, the owner/chef, moved to Winnipeg in 2003 from Argentina with his family. He opened the original Simon’s in 2004 and this manifestation earlier this year. Along with a huge variety of Argentinean empanadas, the kiosk offers chicken deshuesado (a boneless chicken breast marinated in lemon, garlic and wine), a milanesa sandwich and fritatadas. I couldn’t decide between the lorca or paella so I ordered both.

Lorco is an Argentinean stew made from sausage, squash, lima beans and hominy (corn grits). I detected a smoky paprika taste and enjoyed the white beans and mild sausage. The hearty portion came with a wedge of bread to mop up the stew’s sauce.

I was particularly impressed with the paella. Containing a spicy chorizo sausage and a variety of seafood, namely mussels, squid and shrimp, the dish could easily pass as a dinner entrée. The famous Spanish casserole is rice-based but has distinctive onion, garlic and spicy pepper notes. The juices from the seafood permeate the rice and create a hearty and deeply satisfying dish.

I can imagine dining there one evening with a flight of craft beer or a wine flight from The Common also located in the Food Hall.

I forgot to ask who Simon was!

Simon’s Cuisine is open daily from 11 a.m. until 8 p.m. They have an all-day menu available and are wheelchair accessible.