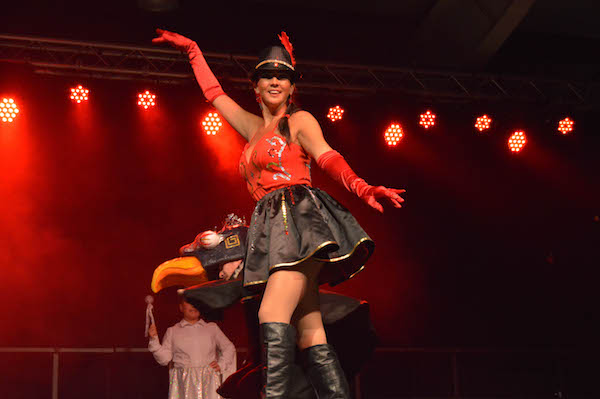 As soon as I walked into Folklorama‘s Chilean Pavilion, I suddenly realized I knew nothing about Chile. I knew it’s in South America, but that’s about it.

Thankfully, the first thing you see when you walk in is the cultural display, where you can learn about the country before watching the show. For example, I learned that Easter Island is in Chile — and you can take a selfie with the famed Easter Island Heads. The display has tables for each region with artifacts covering every square inch of the table, giving some history and a glimpse into life in the most southern South American country (which also means it’s the closest to Antarctica — something else I realized while there).

I approached the menu board and was surprised at how inexpensive all the items were — the highest price was $7. I wrongly assumed that this meant the quantities would be small, so I got both the chicken empanada (about the size of a calzone), and the pastel de choclo, or corn pie (about the size of a large slice of lasagna). The empanada’s pastry is fresh and flaky, and I suggest getting it with the slightly spicy, house-made salsa. The sweet corn pie is a meal all on its own, mixed with meat and other vegetables baked inside. 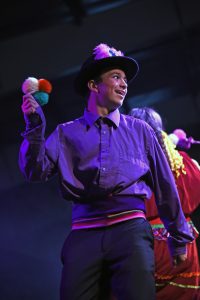 My dining partner had the chacarero, a burger of sorts, with a thin slice of beef, tomatoes, and what we believed to be sliced green beans between a bun. If you’re looking to eat something that doesn’t require cutlery, this would be your best bet.

The Chilean Pavilion’s write up in the Folklorama program boasts about the borgoña, a mixture of red wine, sugar, and strawberries, so I knew I had to try it. It’s sweeter than sangria, and you get a strawberry piece in your mouth with every sip. It’s an excellent summer drink.

The mainstage show started off the way most Folklorama performances start off: very adorable children performing a folk dance, moseying around the stage wearing traditional garb. The 45-minute show is entertaining and colourful, but the real party starts when the dude in the bird mask walks in. The performance that follows is mesmerizing. More masks, more colours, and more costumes all follow, dancing to upbeat music throughout the venue, not just onstage. The performers should be praised for their ability to dance in the heat, let alone in thick costumes with the spotlight on. It’s hard to take your eyes off of them.

Go if: You have kids in tow — the food is affordable, especially for the large quantity, and you can easily feed four people for $10 each, beverages included.
Avoid if: It’s a particularly hot day — the Notre Dame Recreational Centre is not air conditioned, combined with the hot food, it might leave you sweating.