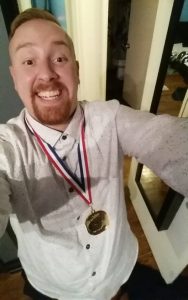 A saucy Winnipeg wing company has its eyes set on future market expansion after claiming gold in the recent Great Manitoba Food Fight.

Winnipeggers likely recognize the LBW brand from their flagship restaurant at the Royal George Hotel in Transcona, or their popular food truck seen roving the streets all summer. From offering city-wide delivery to securing various catering contracts, Little Bones Wings is exceeding annual revenues of $500,000.

“The brand seems to have touched off a crazy chicken wing movement that wants to see Little Bones Wings enter the wholesale market so they can be enjoyed wherever people gather socially and at their grocery store,” said owner Alex Goertzen, who started the company in 2012.

“We want to be the icon of every Grey Cup party in town.”

Wings could then be sold to restaurants, grocery chains, sports venues, community centres, concessions and distributed across the world.