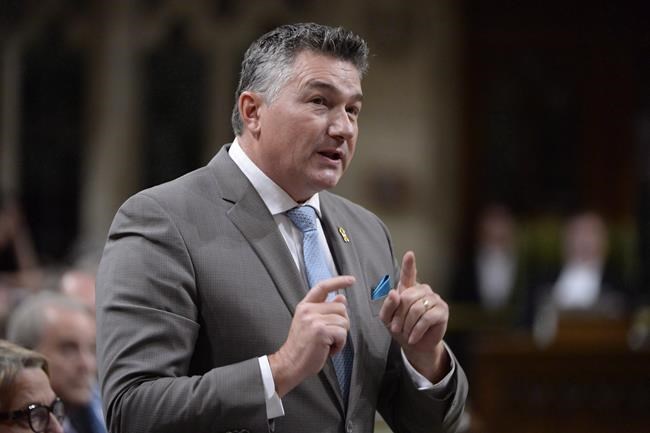 Conservative MP James Bezan asks a question during question period in the House of Commons on Parliament Hill in Ottawa on Thursday, October 27, 2016. A Liberal member of Parliament from Quebec is accusing Bezan of making comments towards her that were “humiliating” and “sexual in nature.” (THE CANADIAN PRESS/Adrian Wyld)

OTTAWA – A Liberal member of Parliament from Quebec says a Conservative MP made comments towards her that were “humiliating” and “sexual in nature” during an event back in May.

Sherry Romanado levelled the accusation Monday, even though Manitoba MP James Bezan had risen in the House of Commons a few hours earlier to deliver an apology — which he later said he’d been trying to give for months.

In a written statement later, Bezan said the incident was reviewed by the Commons’ chief human resources officer who found it did not constitute sexual harassment and did not recommend any disciplinary action.

According to Bezan, the incident occurred as he posed for a photo with Romanado and another individual during an Ottawa-area event.

“I realized that this comment was inappropriate and attempted to apologize the following day but was not afforded that opportunity.”

Bezan said Romanado filed an official complaint against him with the chief human resources officer, after which he immediately offered to enter into mediation so that he could apologize.

“That request was also denied.”

Following Commons protocol for dealing with sexual harassment complaints, the chief human resources officer then launched a review of the incident. According to Bezan, that review subsequently concluded last August that Romanado’s complaint “did not support a claim of sexual harassment. No disciplinary action was recommended against me.”

Nevertheless, he said he subsequently apologized in person to Romanado and completed sensitivity training offered by the House of Commons.

On Monday morning, Bezan apologized again, this time in the Commons.

“Earlier this year I made an inappropriate and insensitive comment in the presence of the member for Longueuil—Charles—LeMoyne,” Bezan said.

“I have nothing but the greatest respect for this member, for this institution, and I sincerely apologize.”

Evidently not satisfied, Romanado forced the Commons into silence when she rose shortly after question period a few hours later to level her allegation against Bezan.

“In May, the member from Selkirk—Interlake—Eastman publicly made inappropriate, humiliating and unwanted comments to me that were sexual in nature,” she said, as her fellow MPs shushed those around her.

“These comments have caused me great stress and have negatively affected my work environment.”

With that, Romanado sat back down, offering no further detail. Her office said she would have nothing more to say on the matter.