Home » Sports » Jets, Panthers to Meet for Pair of Games in Finland Next Season

Jets, Panthers to Meet for Pair of Games in Finland Next Season 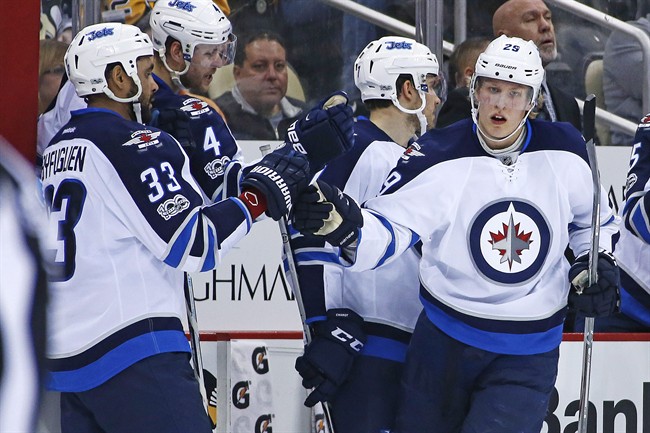 Winnipeg Jets’ Patrik Laine (29) celebrates his goal with Dustin Byfuglien (33) as he returns to the bench during the second period of the team’s NHL hockey game against the Pittsburgh Penguins in Pittsburgh on Feb. 16, 2017. The Winnipeg Jets will travel to Helsinki, Finland for a pair of games at the 2018 NHL Global Series November 1-2. (THE CANADIAN PRESS/AP, Gene J. Puskar)

The Winnipeg Jets will travel to Helsinki, Finland later this year for a pair of regular-season games.

The Jets will face the Florida Panthers at the 2018 NHL Global Series November 1-2.

The hockey club has a history with Finland, with four Finnish-born players having played for the Jets since their return in 2011, including Joel Armia and Patrik Laine. The first inception of Winnipeg’s team included Teemu Selanne and Teppo Numminen.

The Jets played three exhibition games in Finland at the NHL International Challenge in September 1994.

Tickets to the 2018 NHL Global Series games between the Jets and Panthers will go on sale on Monday, March 12 at 9 a.m. local time (2 a.m. CST) at livenation.fi. Both games are scheduled for 8 p.m. local time (1 p.m. CST) at the Hartwall Arena.