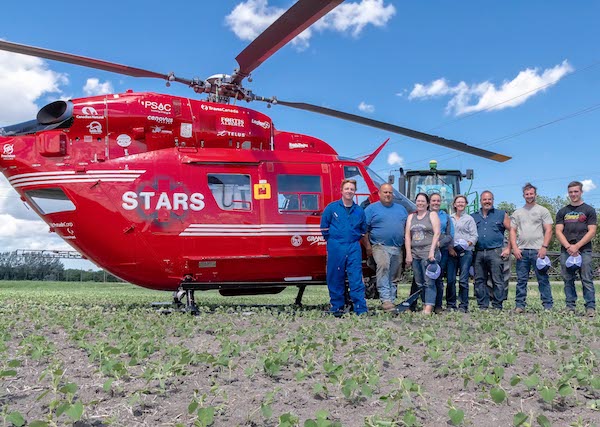 STARS pilot Ian Bonnell poses with members of the Verwey family, which operates Verwey Farms in the Portage la Prairie area. The family has announced they will be donating the profits from 40 acres of soybeans to STARS and is challenging their fellow Manitoba farm families to do the same. (HANDOUT)

The Verwey family, of Verwey Farms near Portage la Prairie, is donating the net profits of their 40-acre soybean crop to STARS.

“Living in a rural community, we think it is important to not only give back to our community, but to help keep our neighbours safe,” said Jill Verwey.

“Verwey Farms is challenging our fellow Manitoba farmers to join us in supporting STARS and the work they do to help critically ill and injured patients in our province.”

Verwey says her family was inspired to help after hearing the recent Critical Care on the Air Radiothon in the area.

Lori Derksen with STARS says the service responds to an average of two emergency missions each day in Manitoba.

“The support of our allies like Verwey Farms helps keep STARS on the cutting edge of critical care and ensures that Manitobans who need emergency medical care receive it quickly,” said Derksen, STARS’ development officer, events.

Any fellow farmers wishing to help can contact Derksen directly at (204) 833-4619 or send an email to [email protected].