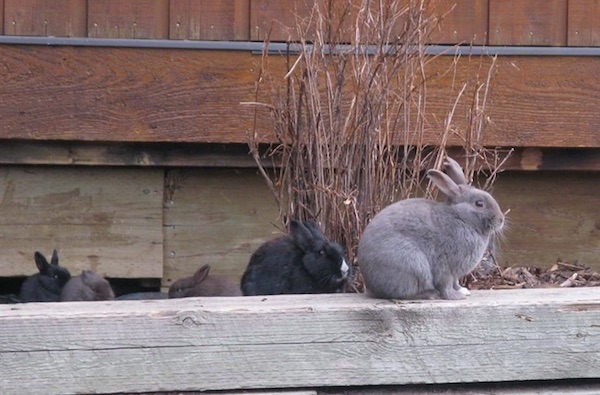 Feral rabbits are shown in Canmore, Alta., on November 22, 2011. Canmore has spent almost $400,000 to rid the town of feral rabbits but the problem persists and residents remain divided over the controversial cull program. (THE CANADIAN PRESS/Bill Graveland)

CANMORE, Alta. – Problems persist in an Alberta mountain town overrun with rabbits despite an ongoing cull that has cost almost $400,000.

Canmore introduced its feral rabbit management program six years ago after much pro- and anti-bunny bickering and outcries from animal rights advocates.

It says it plans to continue the program.

The rabbits are descendants of domesticated animals released in the area years ago.

Residents remains divided over the cull — some are frustrated by the damage done to public and private property, while others don’t mind the long-eared interlopers.

“They should just do a complete eradication rather than just spot (culling). It doesn’t work, as everyone knows about rabbits, so they have to get more serious about it,” said Marlene Foulkes-Jones who has lived in Canmore for 20 years.

Ken Anderson is among those who like the rabbits and said he doesn’t mind having them around.

“The advantages to having the rabbits are … that it makes it sort of a cute, cuddly little place to live,” he said.

But he notes there’s a flip side.

“The disadvantages are the invitation of larger predators that have either rabbits or pets in mind.”

Jay Honeyman, a human-wildlife conflict biologist, said the rabbits do attract large predators to the town.

“We’ve certainly got coyotes and we’ve got bears and cougars known to be feeding on rabbits within the urban footprint,” he said. “The reality is that the rabbits are a potential food source and the town has been trying to get a handle on that.

“It’s a tricky one because rabbits, they breed.”

“The rabbits have always been a bit of an issue in town because they’re cute and fluffy. A lot of people love the rabbits and they don’t see them as a problem,” he said.

“Others recognize that they’re a wildlife food attractant. They have to be managed.”

Borrowman said the rabbits have to be removed to protect people and wildlife.

“What it’s all about is sharing this valley in an appropriate way with the wildlife.”

The budget for the cull has been approved every year during budget talks and there has been no discussion in council about change, he said.