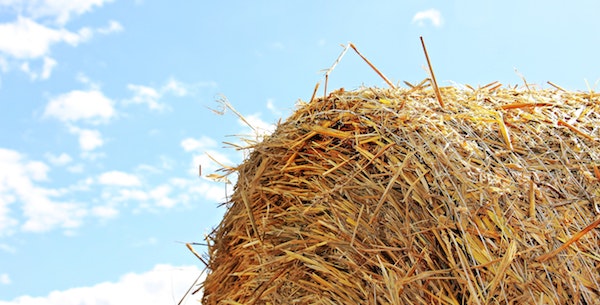 NEEPAWA, Man. — It’s been a dry summer, after a winter that didn’t see a lot of snowfall and another dry summer last year. For livestock and forage producers, this prolonged dry spell has meant that hay crops are down, way down.

Across the western part of the province, where the drought has been most pronounced, hay crops are down as much as 3/4 in some places. I know producers whose hay fields yielded close to 1/10th of what they usually produce.

If you can find them, most large round bales are advertised for $85 to $100 a bale and anyone who hasn’t secured this winter’s hay could be in big trouble. Listings are sparse and the provincial government’s hay listing service has only 11 postings. There, prices are running as high as $0.08/lb, or $120 per 1,500 lb bale, for an alfalfa/brome mix. A hay survey released by Manitoba Agriculture this January found that in 2017, the cost of beef quality hay fluctuated between $0.038 and $0.041/lb.

This year, low per acre yields collided with a decade-long trend, which has seen fewer acres in hay production. According to Statistics Canada data, since 2000, a declining number of acres of hay have been both seeded and harvested. Last year saw a marked decrease in both areas, compared to the previous five years.

While the number of acres in hay production has been declining, overall production had remained relatively steady, thanks to higher productivity per acre. In 2017, the average was 1.9 metric tonnes per acre, compared to the previous five year average of 1.61 metric tonnes per acre. Driving around the country, lots of hay fields are being broken up, destined to grow higher value cereals and pulse crops. But this year, lower acres and unusually low production have created a perfect storm for the livestock industry. To make matters worse, the low levels of precipitation impacted pastures too, meaning producers will likely have to start feeding hay earlier than in previous years.

In 2016, provincial agriculture minister Ralph Eichler announced an ambitious goal of growing the province’s cattle herd to pre-BSE levels by 2026. At the time of the announcement, the provincial beef cattle herd was about 400,000 animals, the target would almost double it, to 750,000 animals. The province seems oblivious to the situation facing producers as they enter winter.

On July 27, the provincial government issued a press release announcing “Provincial services available for producers affected by dry conditions.” The release didn’t so much offer assistance as let producers know about things they should already have been doing. For example, the release reminded producers about tools and resources, including making use of alternate feeding strategies, such as straw, grain, green feed and other crops; using the Manitoba Hay Listing service; forage and pasture management; and livestock production.

Government programs, such as trucking assistance, have historically been common at times like this. If the government doesn’t want to provide assistance to the industry, that’s fine, but then they shouldn’t pretend that growing the cattle herd is a priority. Without assistance, producers will cull and they’ll cull hard. Those most impacted will be the very people the industry desperately needs, younger, less established producers, with a lower land base and not enough assets, including over-year hay, to get through these tight times with their herds intact. Those who don’t cull will be thinking seriously about the number of heifers they retain as replacements and the expected lower prices will cause many producers to question their long-term involvement in the industry.

A year like this will have a profound impact on the growth of the province’s cattle industry, pretending otherwise won’t change those facts.