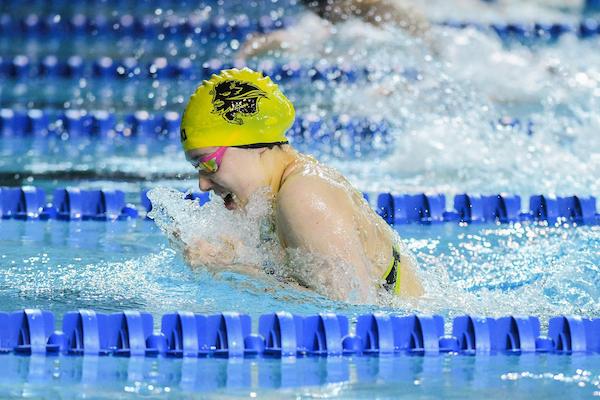 It was a record-breaking weekend for University of Manitoba Bisons swimmer Kelsey Wog in Calgary.

The third-year student-athlete earned herself a gold medal in the in the 200m breaststroke at the 2018 Canada West Swimming Championships.

The Winnipeg native set a new conference record with her time of 2:22.28, breaking an old record set Martha McCabe of UBC in 2012.

If one medal wasn’t impressive enough, it was Wog’s fourth of the weekend. She also won gold in the 50m and 100m breaststroke, along with the 200m freestyle. She was named Canada West Female Swimmer of the Meet for the second straight year, also earning a 2018-19 Canada West First Team All-Star recognition.

Elsewhere at the championships, second-year Bison Dora Modrcin placed fourth in the women’s 100m backstroke (1:01.68). Modrcin finished with the other two Manitoba medals, a silver in the 50m backstroke and a bronze in the 50m butterfly.

Eight women’s swimmers and six men’s swimmers from the Bisons were competing at the conference championships. The Herd will next dip in the water December 14-18 for the Man/Sask Short Course Championships at Winnipeg’s Pan Am Pool.