‘A Lot of People:’ Calgary Zoo Reports Record Attendance Thanks to Panda Family 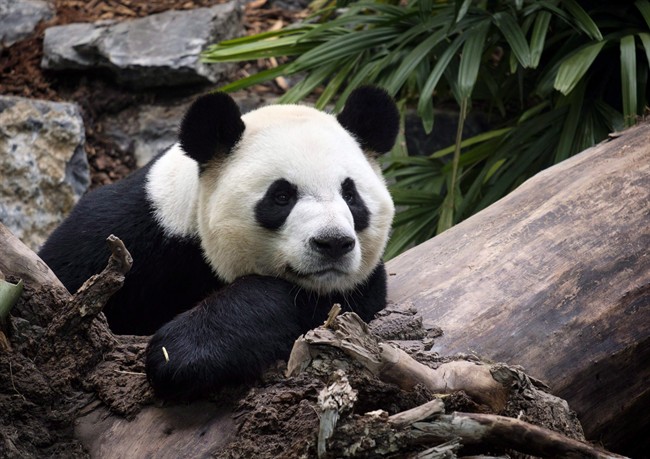 Da Mao, an adult male panda bear, looks on as media photograph him at the Calgary Zoo during the opening of its giant panda habitat, Panda Passage, in Calgary, Alta., Monday, May 7, 2018. (THE CANADIAN PRESS/Jeff McIntosh)

CALGARY – The arrival of a family of giant pandas to the Calgary Zoo last spring created a stampede of visitors once the guests on loan from China were introduced to an eager public.

The zoo surpassed previous records for both attendance and memberships.

“We got 1.48 million visitors — that’s a lot of people. If you look at the size of our community with just over 1.1 million citizens in Calgary, the penetration is immense,” Calgary Zoo CEO Clement Lanthier said Thursday.

Lanthier said the attendance actually came in slightly lower than the 1.5 million visitors the zoo expected.

“We were severely hit in August when the wildfires in B.C. moved a lot of smoke within Calgary for almost 10 days, so that impacted dramatically our attendance,” he said. “Everything in Calgary went into a stall because the smoke was so intense.”

Even with the lower-than-expected attendance, he said, the zoo is in good financial shape with people shelling out cash for panda stuffies, panda T-shirts and food.

“On the revenue side, we are ahead of what we had budgeted.”

The previous record year at the zoo was 2012 when 1.45 million visitors came to see the penguin exhibit, suggesting black-and-white attractions are the quickest way to stay in the black.

“We also had the ring-tailed lemur, which was also black and white, and the snow leopard — arguably they’re black and white — so maybe that’s the way to go forward,” Lanthier said with a laugh.

He isn’t expecting another attendance record in 2019.

“Typically, with the second year of any attraction, panda or anything else, you have a little decline of the attendance.”

The adult pandas, Da Mao and Er Shun, along with their cubs, Jia Panpan and Jia Yueyue are housed in a 2,000-square-metre, indoor-outdoor habitat.

The furry foursome was shipped to Calgary from Toronto in April and spent about a month in quarantine.

The two adults are on loan to Canadian zoos from China as part of a 10-year deal signed in 2012. The cubs were born in Toronto in 2015.

It cost around $30 million to house the pandas in Calgary, including $14.4 million for the exhibit itself. Expanded parking lots, washrooms and restaurants were also required to accommodate more visitors.

The adult pandas are to remain in Calgary for the next five years, while the cubs are expected to return to China before their parents.