Home » The Canadian Press » Woman Survives After Runaway Snowmobile Crashes into Home, Lands on Her

Woman Survives After Runaway Snowmobile Crashes into Home, Lands on Her 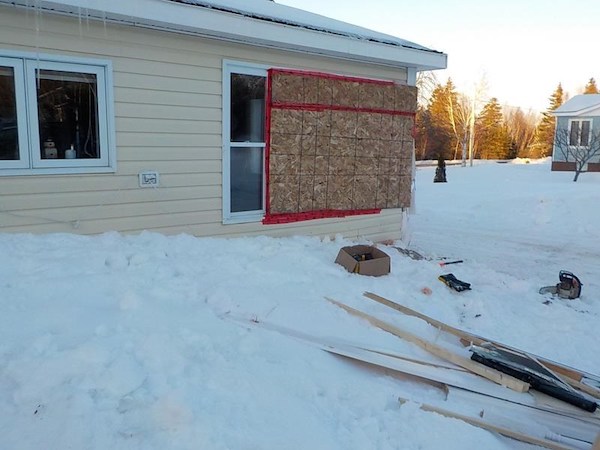 Damage to a home in Porterville, N.L. is seen in this handout photo. (THE CANADIAN PRESS/HO, Barry Porter)

ST. JOHN’S, N.L. — A Newfoundland man says it’s a miracle his wife is alive after his runaway snowmobile crashed through the window of their home, smashing furniture and pinning her underneath.

The throttle of Bruce Porter’s snowmobile stuck and he watched from beside it as the machine started up and launched over a snowbank, straight through the window of his Porterville, N.L., home on Tuesday.

Amazingly, she suffered cuts and lacerations from broken glass but no broken bones.

Photos show the extensive damage to the home. The heavy Yamaha tore down a glass chandelier, busted up a table and several chairs and almost went through a window on the other side of the house, where Louise was sitting.

As of Thursday afternoon, she was still recovering in hospital from the traumatic experience.

Bruce is going about replacing damaged parts of his snowmobile and lost furniture, and said he’s thankful that only material possessions were lost in the accident.

“You can replace chairs and tables, but you can’t replace people,” he said on Thursday.

Relative Barry Porter says the machine may have slowed down after hitting so many objects, and it picked up a cushion before landing on her.

Bruce Porter had gotten off the snowmobile after struggling to start it.

He was standing beside it, trying to hold the throttle in place when it stuck, and the machine raced away from him towards the house.

The snowmobile travelled about 100 metres, and as a lifelong snowmobiler, Barry Porter said he’s never seen such an extreme accident.

The machine narrowly missed a car parked outside the home that might have stopped its momentum.

The snowbank was positioned like a ramp in just the spot to propel the snowmobile — which also had a sled in tow — right through the window.