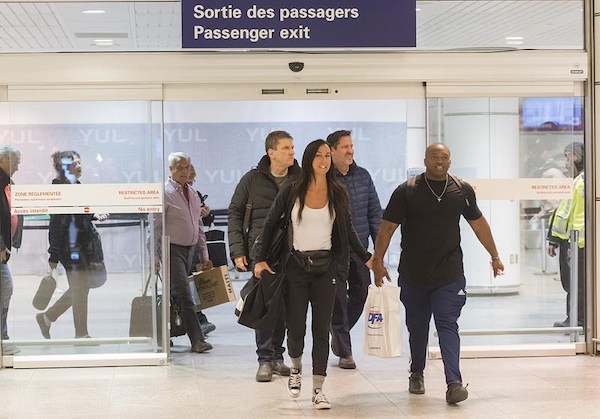 Passengers arrive at Trudeau airport in Montreal, Saturday, February 16, 2019. More than 100 Quebec tourists who had been trapped in Haiti amid violent street protests were flown back to Montreal on Saturday. (THE CANADIAN PRESS/Graham Hughes)

MONTREAL — Dozens of Quebec tourists who had been trapped in Haiti amid violent street protests were greeted with hugs and tears from relieved loved ones as they landed at Montreal’s airport on Saturday.

An Air Transat flight carrying 150 passengers, including the 113 Quebec tourists who had booked the same vacation package through the airline, landed at Pierre Elliott Trudeau airport just after 9 p.m.

As they emerged in small groups, some of the passengers were engulfed in hugs by friends and family, some of whom brought balloons, flowers, and in one case, the family dog.

One Haitian Quebecer, who had not been among the vacationers at the resort, said he had braved the streets of Port-au-Prince to get to the airport.

“It was chaotic, extremely difficult,” said the man, who gave his name as Pierre. “I had my sister with me, and I took a motorcycle, and it wasn’t that easy.”

He said that while he was relieved to be home, he was worried about his mother and sister back in Haiti.

“When I came today, my sister was with me, and she was crying, she was crying a lot, because the situation is not good down there, it’s completely bad,” he said. “I hope things are going to be OK, but I don’t know when they will be OK.”

Helicopter evacuations began early Saturday morning to take the travellers in small groups from a resort hotel on the Caribbean country’s Cote des Arcadins to the airport in the capital of Port-au-Prince.

Cinthia Pietrantonio, one of the passengers from the hotel, said the uncertainty of the situation had been stressful, even though she hadn’t felt like she was personally in danger.

“It’s bittersweet,” she said. “I’m happy to be home, but a little sad my trip didn’t end the way I wanted.”

“It was really organized,” she said. “They did everything to get us out, and the hotel also helped.”

Sylvie Demers, another traveller, said she hoped the week’s events wouldn’t discourage people from visiting Haiti in the future.

“I hope the site will stay open, because it’s a beautiful destination. It’s really something to discover,” she said.

But some passengers had been critical of Transat in recent days, accusing the company of dragging its feet in getting the guests out.

One of them, Normand Rosa, said he was glad Transat finally gave in to pressure to bring the vacationers to the airport, after the company said earlier in the week that logistics and security prevented it from doing so.

Rosa indicated that while the hotel staff had been accommodating and he’d never felt unsafe, it was time to return home.

“It’s better to evacuate before it deteriorates further,” he said in a phone interview Saturday morning.

Christophe Hennebelle, a vice-president for human resources for Transat, defended the company’s actions.

“People were safe at the hotel, and we were not going to endanger them. We were looking for the safest way to get them out,” he said.

He added that once it became clear the roads were too dangerous, the company moved on to the helicopters as a Plan B.

Hennebelle said Transat was pleased with how smoothly the day went and that the airline planned to maintain its flights to Haiti for the time being.

Massive street protests demanding the resignation of President Jovenel Moise have claimed several lives over the past week.

Demonstrators are angry about skyrocketing inflation and the government’s failure to prosecute embezzlement from a multi-billion-dollar Venezuelan program that sent discounted oil to Haiti.

Other Canadians stuck in Haiti have also been making their way to the airport by way of helicopter flights or harrowing road journeys.

An Ottawa doctor and three health professionals from New Brunswick endured a nerve-wracking seven-and-a-half hour road trip that ended with the group hiring an ambulance driver to secure safe passage to the airport on Friday.

Reached Saturday from a stopover in Philadelphia, Dr. Emilio Bazile said he felt lucky to have escaped with only a few bruises from flying rocks that also damaged a vehicle.