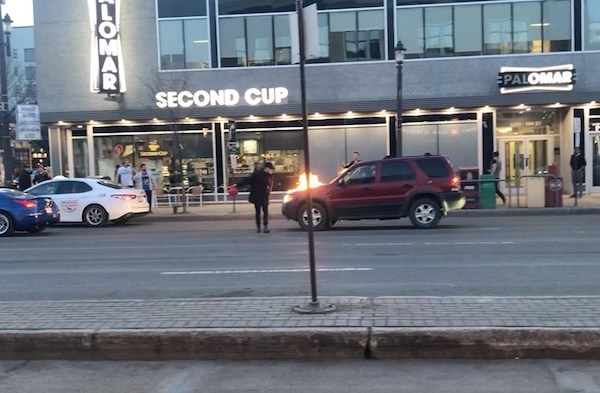 A man stands in front of a vehicle holding what appears to be a gas can as fire burns on the hood of the SUV, in this still image taken from a video provided by bystander Ross Lockwood, in Edmonton on Friday, April 12, 2019. (THE CANADIAN PRESS/HO-Ross Lockwood)

EDMONTON — A burly, bearded man wearing a Hawaiian shirt is being praised for chasing and tackling a person who, in a video, appeared to douse a vehicle with gasoline and set it on fire in Edmonton on Friday night.

Ross Lockwood, who was skateboarding with a friend in Edmonton’s Whyte Avenue bar and restaurant district, said he pulled out his camera and began recording when he overheard someone exclaim that a person had just set another car on fire.

“There was a man wearing dark clothing carrying a jerry can full of gasoline. He was pouring the gasoline onto and by cars — parked cars — but more worrying, he poured it onto the hood of an occupied vehicle,” said Lockwood, who posted his video of the incident on Reddit.

“The vehicle caught on fire.”

The driver turned the corner and pulled over, Lockwood said, and people with fire extinguishers raced to put out the flames.

In the video, the man appears to hold the jerry can towards people on the sidewalk, who kept their distance.

“I think a lot of people recognized just how dangerous it is to try to intervene with someone who’s got a full can of gas and a lighter, and no one took real action until it was safe to do so, and that’s exactly what happened,” Lockwood said.

The video appears to show the man walking across the street, raising his arms and throwing the jerry can into the air as his backpack falls to the pavement. He then appears to continue walking, apparently waving at pedestrians.

The video then shows a person wearing a Hawaiian shirt and jeans running after the man, following him into a Starbucks, trailed by someone carrying what appeared to be a plank.

“A man in a red Hawaiian shirt brought him to the ground, and after that, several others stepped in to aid the man in the red shirt and they held him until police arrived,” Lockwood said.

Police said in an email that they responded to a report of a male pouring fuel onto multiple vehicles and setting them on fire on Friday night.

With the help of a citizen, the email said, a male suspect was taken into custody and charges are pending.

Police said 13 vehicles were damaged but no one was hurt.

Social media reacted to video with accolades for the man in the Hawaiian shirt. Some posts compared him to Magnum P.I. One Batman-themed meme had a picture of a spotlight shining into the air, but instead of showing a bat symbol, it had a Hawaiian shirt.

Lockwood has no idea who the man was.

“I have no background for the man in the red shirt, but I just want to say thank you for the actions that you took on Friday night,” said Lockwood, who has turned over his video to police.