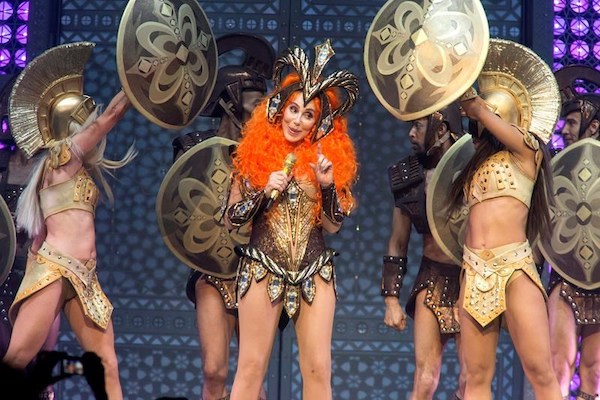 Cher performs in concert during her “Here We Go Again Tour” at The Wells Fargo Center on Saturday, April 20, 2019, in Philadelphia. About 10,000 Cher fans in Winnipeg went home disappointed Tuesday night after learning that a concert by the pop diva at Bell MTS Place had been cancelled. (THE CANADIAN PRESS/AP, Owen Sweeney/Invision)

WINNIPEG — Thousands of Cher’s fans grumbled with disappointment on Tuesday night after the pop diva unexpectedly cancelled her Winnipeg show while they were already inside the arena.

Nearly an hour after her opening act cleared the stage, concertgoers were told the 73-year-old singer was blindsided by a “sudden short-term illness” that would prevent her from performing.

No further details on her condition were provided, and a representative for Cher did not return a request for comment on Wednesday.

The postponement, delivered by a solo crew member on the stage at Bell MTS Place, left the crowd humming with displeasure as they filed for the exits.

“I don’t believe it,” one woman could be heard shouting in a video posted on social media.

About 10,000 people were in attendance, according to organizers, and many were already in the concert spirit after funkmaster Nile Rodgers and Chic opened the show.

Cher’s illness put a damper on the first stop of the Canadian leg of her Here We Go Again 2019 tour, which features some of her biggest hits and a selection of ABBA covers from her latest album.

She’s booked to play numerous dates across the country in the coming days, including Saskatoon (May 23), Edmonton (May 25), Calgary (May 28) and Vancouver (May 30). All of those dates remain on her schedule at this time.

Concert promoter Live Nation said in a statement that Cher’s Winnipeg show would be rescheduled and that fans should hold onto their tickets.