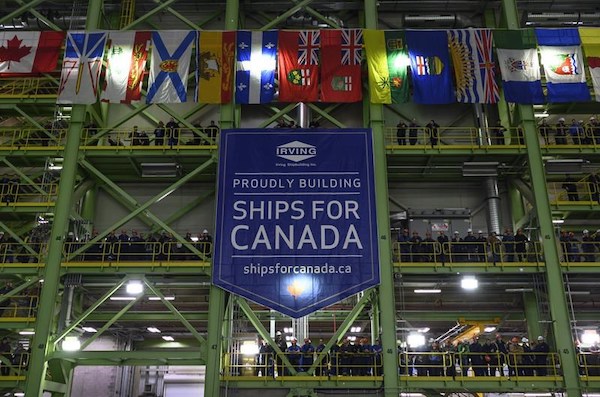 Shipbuilders and Irving employees attend an announcement at Irving Shipbuilding’s Halifax shipyard in Halifax on Friday, February 8, 2019. Prime Minister Justin Trudeau is expected to announce Wednesday that the federal government is buying two more Arctic patrol ships on the top of the six it has already ordered from Halifax-based Irving Shipbuilding. (THE CANADIAN PRESS/Darren Calabrese)

OTTAWA — Prime Minister Justin Trudeau is expected to announce Wednesday that the federal government is buying two more Arctic patrol ships on the top of the six it has already ordered from Halifax-based Irving Shipbuilding.

However, unlike the first six ships, which are being built for the navy at a total cost of $3.5 billion, a government source said the seventh and eighth will be built for the Canadian Coast Guard.

The source, who was not authorized to comment publicly, said the move is intended to address the Canadian Coast Guard’s desperate need for new ships.

Documents obtained by The Canadian Press earlier this year warned that more than a third of the coast guard’s 26 large vessels have exceeded their expected lifespans — and many won’t survive until replacements arrive.

And that advanced age is already affecting the coast guard’s ability to do its job, including reduced search-and-rescue coverage, ferry-service disruptions and cancelled resupply runs to Arctic and coastal communities.

The second problem is the threat of layoffs, which Irving has long warned will happen unless the government fills a gap between when the last Arctic patrol ship is finished and construction on the navy’s new $60-billion warship fleet, the source said.

The government sought to address that gap in November when it ordered the sixth Arctic patrol vessel for the navy from Irving and agreed to pay the shipyard to slow production for a total cost of $800 million.

Government officials at the time defended the high cost of that move, saying a third-party assessment commissioned by the government, which has never been made public, indicated it would cost even more to allow a gap to persist.

“Ultimately what happens is the workforce gets laid off, you rehire people, it’s not the same people so you’re retraining, and then you have this learning curve,” Patrick Finn, the Defence Department’s head of procurement, said in January.

“From some of the data we’ve run, doing what we’ve done, if we don’t do it, we’re probably going to pay that much money anyways in inefficiencies and get nothing for it. So the analysis shows that this is really a prudent way forward.”

Even then, federal bureaucrats and Irving both warned more would need to be done as even with those measures, there was still the threat of an 18- to 24-month gap between construction of the two fleets.