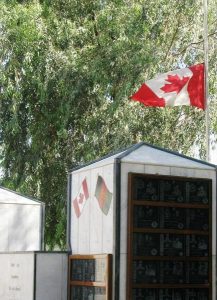 The Maple Leaf flies at half-mast over the memorial to fallen soldiers at the Canadian task force headquarters at the Kandahar Airfield on Monday, June 15, 2009. (THE CANADIAN PRESS/Colin Perkel)

TORONTO — Canada’s top soldier has acknowledged the anger many Canadians felt about the way the Kandahar memorial was unveiled in Ottawa last week — in a shroud of secrecy, without the families of the dead soldiers present, and with ongoing limited public access.

In an interview from Brussels, Gen. Jonathan Vance promised Wednesday to make it right.

“We’ll turn this around,” Vance said. “Where we want to get to is that anybody who wants to visit that memorial can visit.”

The monument, with shiny black plaques featuring each of Canada’s military and civilian war dead, stood for years at Kandahar Airfield in southern Afghanistan. It was moved to Canada after the combat mission ended in 2011.

Other than a tour of the country, it had been languishing in a warehouse until now.

Last week, the opening of the Afghanistan Memorial Hall occurred without public notice or invitations either to relatives of the dead depicted on the plaques or to wounded veterans. Only days later — just ahead of the Victoria Day weekend — did the Department of National Defence make the opening public.

“To ensure a dignified, dedication service, a quiet, limited service was held in honour of those we have lost,” the department said in a statement. “The decision to hold a humble, internal event was made by senior leadership to ensure proper reverence.”

“It upsets me because it seems like the federal government is slowly trying to make everyone forget about the conflict in Afghanistan, the people who served there and their families,” Collins said.

Sandra Lang, whose daughter Michelle Lang has a plaque on the memorial as the only Canadian journalist killed in Afghanistan, said “very disappointed” barely describes how she and her husband feel.

“We can’t understand how the bureaucracy came up with this misguided plan,” Lang said. “As usual, the civilian casualties are ignored — we have had no correspondence or notification of the memorial.”

Vance, who was on hand for the opening, denied any attempt to hide the war effort. The aim, he said, was to get the memorial up and running as quickly as possible.

“It was a beautiful ceremony but it was absent the families and the wounded,” Vance said. “It happened. We need to now come up with a way to ensure accessibility.”

“(We want) to ensure that it is a monument that will be there for everyone who wants to remember and celebrate those veterans who stood for Canada,” he said.

Sean Bruyea, a retired captain and veterans advocate, called the opening a “hypocritical farce.” While Vance and other government officials often talk about the importance of family to military members and the military mission, he said, the words ring hollow.

“Their actions have consistently contradicted such empty platitudes,” Bruyea said. “Preventing a nation, its soldiers and their families to openly mourn only turns the grief inwards upon themselves. Ultimately, some are left feeling so abandoned by our country’s government that suicide seems like the only option.”

Vance said the fragility of the monument was behind the decision to put it indoors at defence headquarters. It would not, he said, have withstood being outdoors. Consideration was given to the War Museum but the memorial is “more than an artifact,” he said.

The memorial would not be moved, Vance said.

“There’s a certain elegance to that, because it’s a constant reminder for those who work in the headquarters … of the perils of war and the need to make good decisions around the committal of troops.”

Vance said he had asked “the team” to go back and look at ensuring wider access.

“You’ll see very quickly a change that is quite proactive that seeks to get families in but as importantly, the general public — people who want to see it,” Vance said. “We’re probably going to have to do something like what happens at the Pentagon, where there are Pentagon tours.”

The department wouldn’t say when any changes will be implemented.

“Planning is currently underway to facilitate access to veterans who would like to pay respects to their fallen comrades,” the department said. “We are also considering ways to accommodate special visits by the public on appropriate occasions.”

Conservative Leader Andrew Scheer said what had gone down was an “appalling insult” to the families of those who died for the country.

“It seems like Justin Trudeau’s government is embarrassed at Canada’s role in Afghanistan,” Scheer said. “He should immediately apologize and hold a public dedication.”

Defence Minister Harjit Sajjan said he has asked the military to make sure that the families have access “whenever they would like.” He said the government was still planning a public national monument for the Afghanistan mission.

← Previous: Stretch of Westbound Midwinter Avenue to Close on Thursday Next: Feds Offer $15.8B in New Ships to Vancouver, Halifax While Opening Door to Davie →
Tags: Canada | Ontario | Toronto