Home » Sports » Jockeys Cruz, Dawkins Successful in Their Own Way

Jockeys Cruz, Dawkins Successful in Their Own Way 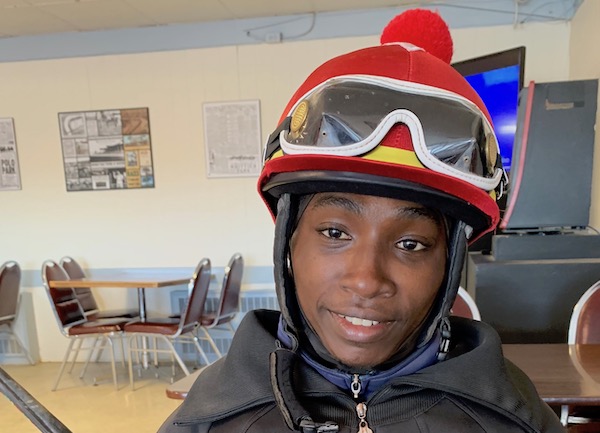 Last weekend, young rider Dane Dawkins got on the board with his first win at the Downs.

As the racing season heats up, a handful of first-year jockeys at the Downs are starting to announce their presence with authority. While Cruz now leads all jockeys with nine wins, three seconds, five third-place finishes and $82,619 in winnings, newcomers Ronald Ali has two wins, Dawkins now has one and Oral Bennett, Dillon Khelawan, and apprentices Nirone Austin and Nicolle Disdier are starting to get some mounts.

For Dawkins, 25, who has cracked the Top 10 in every season of racing since he started to ride professionally in 2016, coming to Winnipeg has been a big step up, a step that included an important first.

It was on a Gaskin-trained horse named Lipan that Dawkins got his first win. A longshot in the final race of the night, Dawkins brought Lipan home to pay $13.10, $5.90 and $3.50 on a $2 wager. The five-year-old bay gelding won by a length and a half and the 25-year-old jockey had come a long way from Jamaica’s Caymanas Park.

“I was 18 and a friend brought me to the track in Jamaica and showed me around and I decided right there that this was what I wanted to do,” Dawkins said. “In two weeks, he brought me back and I went on a horse and from that day forward, I rode every day. I had four good years riding in Jamaica and now I’m here and I love it.”

Cruz came to Winnipeg with 259 career wins and earnings of $2,600,000 and was riding at Turf Paradise in Phoenix when Silva convinced him to come to Winnipeg. Ali is the former leading rider at Santa Rosa Park in Trinidad.

With a big weekend coming up at the Downs, watch for these first-year riders. Especially Cruz, who has been riding Silva’s horses. Silva leads the trainer’s standings with 10 wins, four seconds, eight thirds and $97,883 in winnings. The Cruz-Silva combination has been gold for bettors so far this spring.

Racing on both nights starts with the post parade for Race 1 at 7:15 p.m.

And don’t forget, tonight will be the Celebration of Life for racing legend Ardell Sayler, from 5 p.m. to 7 p.m. on the main floor at Assiniboia Downs.