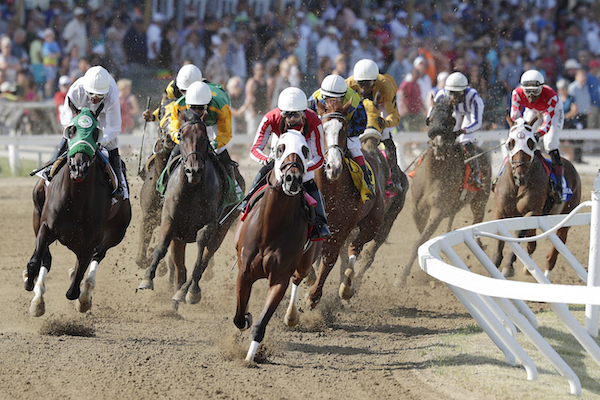 Oil Money comfortably in front at the top of the stretch. (JAMES CAREY LAUDER PHOTO)

It’s what the seven other owners and trainers either expected or feared from Turf Paradise invader Oil Money on Monday afternoon.

They got exactly what was expected or feared. 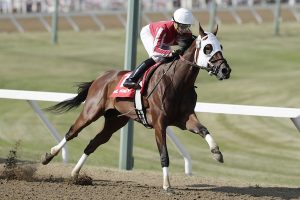 From the second the gate opened until the final stride across the finish line, the Robertino Diodoro-trained Oil Money was in command. The three-year-old Dark Brown gelding from J.P.’s Gusto out of Crytocandiac by Candy Ride led from start to finish to easily claim the biggest race of the year at Winnipeg’s Assiniboia Downs.

Monday’s 71st running of the $75,000 Manitoba Derby was only competitive for a brief moment at the start of the final turn when Moscow Minister and Flinch challenged, but Oil Money’s jockey, Orlando Mojioca, looked back, saw the challenge, asked for more and got it as Oil Money cruised down the stretch and won, with an easy stride, by four lengths.

Oil Money (our selection here at ChrisD.ca on Friday), had never run a mile and eighth before and even his trainer was concerned about the distance. But this one was never really in doubt as a Robertino Diodoro-trained three-year-old won the Derby for the third time in four years (Sky Promise in 2018 and Inside Straight in 2016). He also won the $30,000 Debutante Stakes with Arizona Sun on Friday night.

Interestingly, the fourth-place finisher was Flinch, a local $5,000-claimer that won its final race as a two-year-old at Indiana Downs and then was claimed before winning that $5,000 claiming race at Assiniboia Downs on June 26. It was claimed that day by MJ racing and is now trained by Juan Pablo Silva and ridden by Ronald Ali.

Meanwhile, Oil Money, owned by Charles Garvey, had already won the Golden Boy Stakes at Assiniboia Downs back on June 22 so he was comfortable on the track. This year, he has raced twice at Turf Paradise in Phoenix and won once. He was clearly the class of this year’s Derby as he picked up his third win of 2019.

“I talked all week with Robertino and he was calling his horse ‘a sprinter’ and was worried that Oil Money had never run a mile and an eighth before,” said Manitoba Jockey Club President Harvey Warner. “But Robertino also said the guys in his barn kept saying that they’d worked him out and they had no concerns about the distance. Robertino and has people did a wonderful job with that horse.”

The race went off in front of a gigantic crowd at the Downs. The place was filled to the rafters, it was standing room only and there wasn’t an available seat to be had. It was a fitting Derby Day for what has been a remarkable season of jam-packed crowds at ASD.