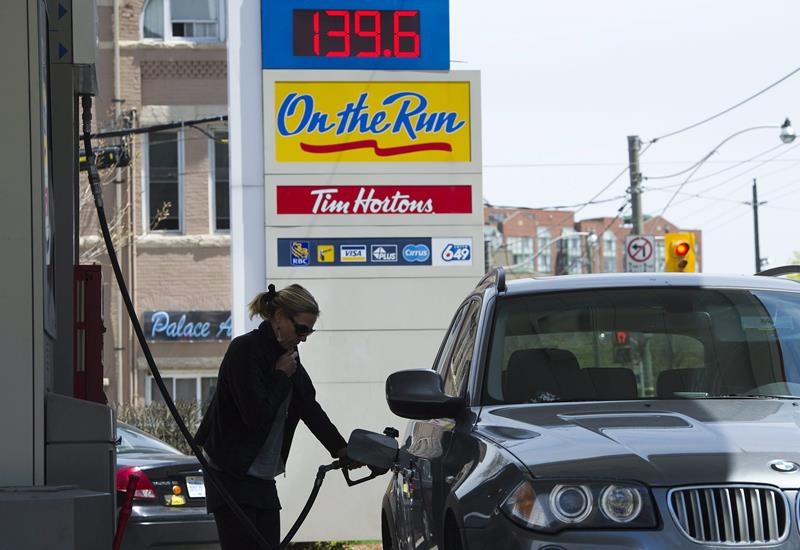 A woman pumps gas in Toronto on Tuesday, May 10, 2011. (THE CANADIAN PRESS/Nathan Denette)

EDMONTON — Carbon-tax-fighting governments in Alberta, Saskatchewan and Manitoba say they have no plans to follow Ontario’s lead and force gas stations to put anti-carbon tax stickers on their pumps.

Ontario’s Progressive Conservative government has set Aug. 30 as a deadline for stations to have the stickers posted or face fines of up to $10,000 a day.

The stickers say the federal carbon tax has added 4.4 cents a litre to the price of gasoline, which will rise to 11 cents per litre by 2022.

In Alberta, Premier Jason Kenney’s office says his government is focused on a court challenge of the federal tax.

A spokesman for Saskatchewan Premier Scott Moe says the government has no plan to make the stickers mandatory.

And the Progressive Conservatives in Manitoba, currently in an election campaign, say they’re not considering the stickers.

The federal government has imposed a carbon tax on Ontario, Manitoba, Saskatchewan and New Brunswick because they opted not to bring in their own carbon pricing. It plans to do so in Alberta in the new year.

Ottawa has promised to rebate much of the money collected directly to taxpayers in each of those provinces.

In a statement, Kenney’s office said Alberta drivers in the province already know the effects of a carbon tax on gasoline prices, because the previous NDP government had one that Kenney’s government repealed.

“We are challenging the federal government’s constitutional authority to impose Justin Trudeau’s carbon tax, and are confident in our case. That is our focus at this time,” the statement said.

A statement from Moe’s spokesman was brief.

“Saskatchewan has no plans to mandate operators to display stickers showing the cost of the carbon tax on gas prices,” said Jim Billington.

Brian Pallister in Manitoba, running to keep his job as premier, previously announced a blackout on government communications in the leadup to the Sept. 10 election. But when asked about the stickers, his PC party said in an email: “Not at this time.”

Legislation making the stickers mandatory in Ontario was included in the budget bill. The cost of printing 25,000 decals was pegged at about $5,000 and does not include the price of distributing them to the province’s 3,200 gas stations.

The plan has been criticized by the Ontario Chamber of Commerce, which has said its members have expressed concerns regarding the political nature of the stickers.

“This is just par for the course for a government wasting taxpayers’ dollars to fight climate action instead of climate change,” she wrote.

“And now they are impeding the free speech of small-business owners.”