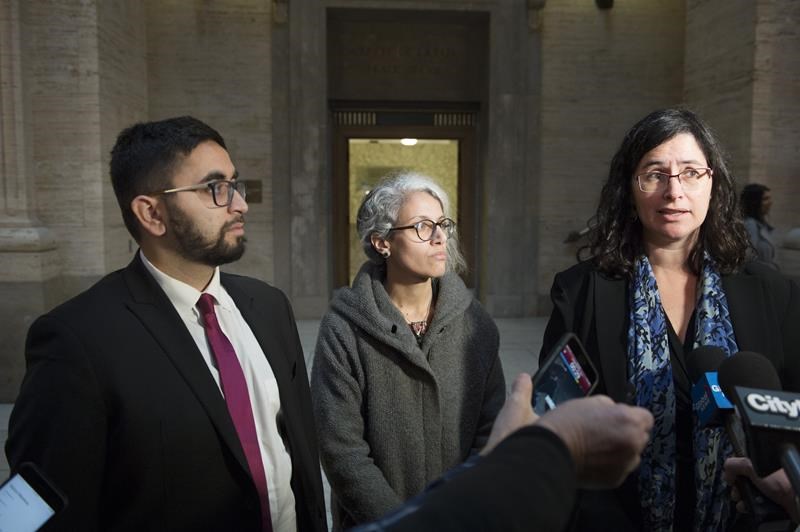 Members of the National Council of Muslims Mustafa Farooq, left, and Bochra Manai, centre, and Noa Mendelsohn Aviv a member of the Canadian Civil Liberties Association (CCLA) speak to reporters at the Quebec Court of Appeal in Montreal, Tuesday, Nov. 26, 2019. (THE CANADIAN PRESS/Graham Hughes)

MONTREAL — The Quebec Court of Appeal has rejected a request to suspend the central elements of the province’s secularism law, even as one of the judges who made the decision acknowledged it amounted to an abandonment of Muslim women who wear hijabs.

In a 2-1 ruling, all three judges acknowledged the law is causing harm that may be serious and irreparable to some of those affected. Bill 21, adopted last June, prohibits some public sector workers, including teachers, police officers and prison guards, from wearing religious symbols.

Justice Dominique Belanger said it was “apparent” that the law violates the fundamental rights of certain individuals, such as female teaching graduates who could be denied employment for wearing the Muslim hijab.

But Belanger nevertheless concluded Quebec’s use of the notwithstanding clause means the law should not be suspended until the case can be heard on its merits next year.

“In the case at bar, the notwithstanding clause dictates that, at this stage of the case, the courts must abandon to their fate women graduates who are willing to work and who, for the sole reason that they wear the veil, have been denied access to a job for which they hold all the skills,” Belanger wrote.

Justice Robert Mainville, who also decided to reject the appeal, said that while the evidence suggested some people would suffer “what may be characterized as serious and irreparable harm,” he said the appellants had not adequately demonstrated the law disproportionately targets women — which is a key argument, since the notwithstanding clause is not applicable to the section of the Canadian Charter of Rights and Freedoms granting equal rights to the sexes.

A national Muslim organization, a civil liberties group and a university student who wears the hijab were seeking to have the law suspended while their full legal challenge is heard. They presented evidence that people are already being denied employment because they wear religious symbols.

Quebec Superior Court rejected their request in July, ruling the groups and the student failed to demonstrate the law was creating enough damage to warrant a stay of its central components.

On Thursday, Mainville and Belanger upheld the decision, citing a legal principle that states a law is generally presumed to be in the public interest unless it can clearly be shown otherwise.

“Unless it is clear that the enactment does not have a valid public purpose, the courts must assume it does,” Belanger wrote.

Mainville, for his part, said it would be “imprudent” to assume the law would be declared unconstitutional, since several other western democracies have successfully enacted similar legislation.

Hesler, who faced calls to withdraw after calling herself a feminist in court during the appeal hearing, noted the full case is to be heard in October 2020.

In a statement following the decision, the groups challenging the law vowed to continue the fight.

“This suffering has been imposed for no other reason than what one wears, how one practises religion, or the fact that one looks ‘different’ than the majority,” said Noa Mendelsohn Aviv, equality program director at the Canadian Civil Liberties Association.

“We are not done fighting this unjust law.”

Mustafa Farooq, executive director of the National Council of Canadian Muslims, said that while the group was disappointed, “we never thought that fighting for the rights of Quebecers and Canadians would be easy.”

Quebec Justice Minister Sonia LeBel expressed satisfaction with the decision. “We will continue to defend the merits and the constitutionality of this law,” she said in a statement.

In Ottawa, NDP Leader Jagmeet Singh said he was “sad” about the decision but noted the courts had yet to rule on the substance of the issue.

“The law is something I’ve heard from a lot of people is discriminatory. It makes people think they don’t belong, and they’re afraid of a law like that,” he said.