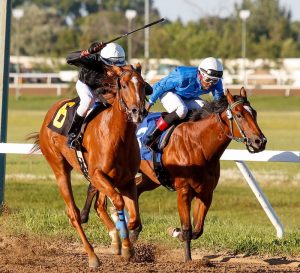 WINNIPEG — By 10:45 p.m. Tuesday, another thoroughbred racing season in Manitoba will be over.

Antonio Whitehall will be crowned the jockey champion. Jerry Gourneau will win his second trainer’s title. And two-year-old filly sensation Melisandre will take a final run at the boys as the 50-day Assiniboia Downs live racing meet draws to a close.

“It is always so satisfying to finish the racing season with a look at the future stars of the sport when we feature the young Manitoba bred two-year-olds in the spotlight with the Buffalo Stakes and then the oldest stakes race in our history with the Winnipeg Futurity,” said Downs CEO Darren Dunn on Sunday.

“Melisandre is a two-year-old filly who might be something special. Not only is she undefeated in three starts going into the Buffalo Stakes, but she has been dominant. That she is a Manitoba bred is such a feather in the cap for local breeders.

“The Winnipeg Futurity is wide open and will be the race of the night on Monday. Don’t be surprised if the Alberta Invader Bells and Whistles has her hands full with the Manitoba bred gelding, Call The Cops, who breaks from the rail position with runaway leading rider Antonio Whitehall in the saddle.”

There is no doubt about the success of Whitehall and Gourneau this season. The two 2018 champions have led from start to finish and could have received their trophies more than a month ago. That’s the dominance they have shown in their fields this season.

Whitehall, the 26-year-old from Bridgetown, Barbados, leads No. 2 Stanley Chadee Jr. by 28 first-place finishes with only two nights of racing remaining. Whitehall, who won the 2018 ASD jockey title with just 41 wins, has 73 victories after winning five times last week. He also has 50 seconds and 55 third-place finishes in a track-leading 286 starts and was in the money 12 times last week. He has now earned a whopping $681,321 for his owners and has finished in the money an amazing 64 per cent of the time this season.

He has also been flying back and forth between Assiniboia Downs in Winnipeg and Century Mile in Edmonton this season and, as a result, he is the No. 3 jock at the Edmonton track.

He rode one winner, on a horse named Carramiamine, on Friday night in Edmonton and now has 25 wins, 17 seconds and 21 thirds and $218,927 in winnings in 131 starts at Century Mile. As a result, he’s the leading jockey in Canada in 2020 with 98 victories and $726,048 in total winnings. He could reach the Century mark in Edmonton on Sunday night or more likely here in Winnipeg on Monday.

Meanwhile, on the trainer’s ledger, Jerry Gourneau is so far ahead now that the rest of the trainers’ group can barely see him. The 2018 champion who hails from Turtle Mountain Chippewa Reserve in Belcourt, North Dakota has 70 wins, after winning five times this past week. He also has 47 seconds, 41 thirds and an incredible $669,180 in earnings in 284 starts this season. He leads No. 2, defending champion Tom Gardipy Jr., from Beardy’s and Okemasis Cree Nation in Duck Lake, Sask., by 33 victories.

The trophies for both Whitehall and Gourneau were engraved in late July.

To start the week on Monday, it’s the $30,000 Winnipeg Futurity over six furlongs. The 2-1 morning-line favourite is the Kentucky-bred two-year-old filly Bells and Whistles. Owned by Dialed in Racing Stable, True North Thoroughbreds and Graham Thoroughbreds, Bells and Whistles is trained by Craig Smith and ridden by Richard Mangalee. She has one win in three career starts.

The second favourite is Manitoba-bred Call the Cops at 5-2. Owned and bred by Dr. Betty Hughes, trained by Elton Dickey and ridden by Antonio Whitehall, Call the Cops finished second in the CTHS Sales Stakes on Aug. 25, in his only start.

Then comes Fire On Command, another two-year-old filly at 3-1. Owned by Shelly Brown and Steve Holburn, officially trained by Shelley Brown and ridden by Kayla Pizarro, this Kentucky-bred is the sentimental favourite.

Trainer Shelley Brown — the 2012 champion trainer and the only woman to have won the title — is currently undergoing treatment for cancer. Evidently, an X-ray for some pain in her shoulder, informed doctors that the 47-year-old who was born and raised in Saskatchewan had been stricken. “My body is riddled with cancer.,” she told Track Insider Ivan Bigg.

Her assistant for the past 10 years, Scott Creighton is now managing her stable and a win on Monday night would be a boost for everyone who knows and works with her.

Meanwhile, on Tuesday night – the final night of racing for 2020 – the final Stakes race will be held. It’s the $30,000 Buffalo Stakes for two-year-olds featuring four geldings and two fillies. The morning line favourite at 3-5 is no surprise – it’s the undefeated Melisandre.

On Tuesday, she is expected to get her toughest challenge from stablemate Impressive Sense. Impressive Sense, 3-1 on the morning line, was also bred in Russell, Man., by Cam Ziprick at Ziprick Thoroughbreds and Charles Fouillard. She is owned by Barry Arnason and Dump Truck racing Stable, trained by Michael Nault, and ridden by Kayla Pizarro. In three races, she’s had two seconds and a third. She was third behind Melisandre in the CTHS Sales Stakes and second in the Graduation Stakes on Aug. 8. She was fourth in her debut in a Maiden Special Weight on July 22, the same race won by Melisandre.

This race could cap off a tremendous two-year-old season for Melisandre.

Live racing begins Monday night at 7:30 p.m. but don’t forget that on Tuesday night, the season will finish with a double mandatory payout event. The Jackpot Hi-5 Pool has broken the $50,000 mark already and the Pick 5 Jackpot is now more than $120,000.

“Estimations for the final total of the pools vary widely but the combination could possibly exceed $1 million for this event,” said Dunn.

“We’re really excited to have another opportunity to offer a mandatory event with big jackpots to close out what has been an unprecedented race meet at the Downs.”