By Lee Berthiaume and Joan Bryden, The Canadian Press 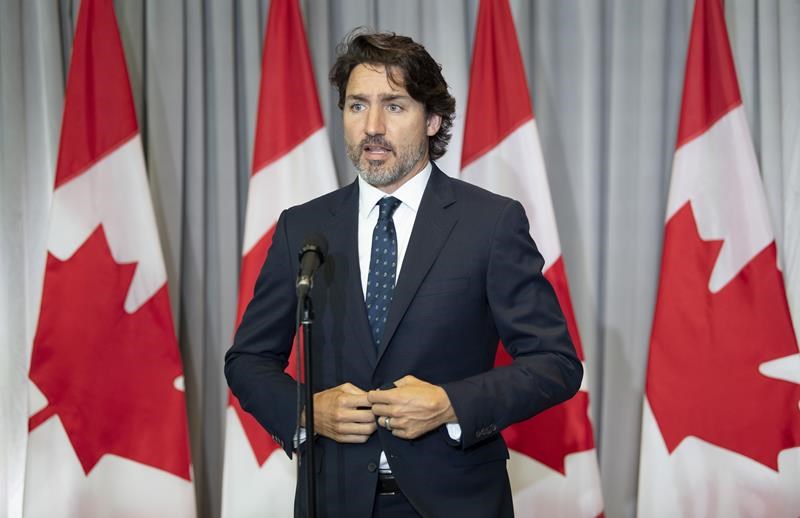 Prime Minister Justin Trudeau speaks with the media before the first day of a Liberal cabinet retreat in Ottawa, Monday, September 14, 2020. (THE CANADIAN PRESS/Adrian Wyld)

OTTAWA — The threat of a federal election seems to be easing as the Liberal government prepares for a return to Parliament next week amid concerns Canada could already be heading into a dreaded second wave of the novel coronavirus.

Fears of a COVID-19 resurgence hung over a cabinet retreat Tuesday as Prime Minister Justin Trudeau and his ministers met behind closed doors for a second straight day to plot a path through — and eventually beyond — the pandemic.

Yet politics were also heavy in the air as talk moved to the return of Parliament with a throne speech on Sept. 23 that Trudeau had previously suggested would lay out a bold plan for rebuilding Canada’s economy. The government now says it will largely focus on containing the effect of the illness.

There had been questions in the past few weeks about whether the throne speech would serve as the catalyst for a fall election, as the minority Liberal government would need the support of at least one opposition party to survive a confidence vote in the House of Commons.

There was also speculation the Liberals wanted an election, and were planning to use the throne speech as an excuse for launching a campaign in the hopes of winning a majority government.

Such talk was emboldened by Monday’s election results in New Brunswick, where the Progressive Conservatives under Blaine Higgs went from a minority to a majority government by riding a wave of support for its handling of the COVID-19 crisis.

NDP Leader Jagmeet Singh appeared to take the wind out of federal election speculation on Tuesday, suggesting his party would hold its nose and give the government a pass on the throne speech and then hold the Liberals to account on the budget or future legislation.

“What they say in the throne speech really doesn’t have that much impact. It doesn’t really matter when it comes down to it because they’ve said a lot of things in the last throne speech that they haven’t followed through on,” Singh said.

“I want to see implementation, perhaps in the budget. The budget bill might be a way for us to really gauge if the government is serious about following through.”

The throne speech is expected to include some commitments that would align with NDP priorities, such as on child care. This increases the likelihood, although does not guarantee, that Singh’s party will find a way to support it.

Singh added he is scheduled to speak to Trudeau by telephone later this week, in which the NDP leader planned to push the government not to reduce the $2,000-per-month Canada Emergency Response Benefit.

Trudeau is also scheduled to speak to Conservative Leader Erin O’Toole, Bloc Quebecois Leader Yves-Francois Blanchet and Green party Leader Elizabeth May about the throne speech later this week, according to the Prime Minister’s Office.

The theme of congeniality emerged as fears of a second wave of COVID-19 were heightened after another increase in the number of positive cases in Canada. That continues a troubling trend in recent weeks that has hijacked the Liberals’ talk of setting a bold new post-pandemic course for Canada.

Health Minister Patty Hajdu was unable to say Tuesday whether the trend is a temporary blip — or a cause for larger concerns, saying: “It’s hard to speculate because we still have time to actually keep these numbers under control if we all work together as governments and as individuals.

“But listen, we can’t rule that out. We can’t rule out that we could continue to see these numbers rise across the country. And that is the real risk of COVID-19.”

The threat posed by COVID-19 was underscored on Monday when the Bloc Quebecois announced that Blanchet and the rest of his caucus were self-isolating after a staff member tested positive for the illness. The positive test came after an in-person caucus meeting.

The Bloc’s experience focused attention on the pending return of Parliament next week, including the question of how many members of Parliament would be allowed to sit in the House of Commons and how voting will be conducted.

The Conservatives remain opposed to allowing electronic voting, insisting there are safe ways to allow all 338 MPs to vote on motions and bills. But the Liberals, NDP and Bloc support having only a small number of MPs in the chamber, with most participating virtually, including voting remotely.

Government House leader Pablo Rodriguez on Tuesday suggested the hybrid model was the only answer to ensure all MPs have their voices heard in the House while remaining safe.

Heritage Minister Steven Guilbeault urged the Conservatives to agree to such a measure.

“We believe that the return of the House should continue on the basis of the hybrid model that we have so that there’s not 338 people packed into a very small room where we could really contaminate each other,” Guilbeault said.

“And I really hope the Conservative party will come around and understand that safety is a very important thing for Canadians.”

The throne speech is expected to include three main priorities: measures needed to protect Canadians’ health and avoid another national lockdown; economic supports needed to help keep Canadians financially afloat while the pandemic continues; and longer-term measures to eventually rebuild the economy.

In particular, it is expected to promise more funding for health care, including long-term care homes, which have borne the brunt of the more than 9,000 deaths from COVID-19 in Canada. It is also expected to promise money for child care so that parents — especially women, hardest hit by the shutdown — can go back to work.

Details on the longer-term recovery measures won’t be revealed until an economic statement later in the fall.

The COVID-19 resurgence has forced the government to focus on the immediate challenge it poses, pushing its previous priority — the climate change crisis — to the sidelines.

Still, she argued that the government can do more than one thing at a time.

“When the pandemic is over, and we will get through this, we still have another crisis. It’s called climate change,” McKenna said. “We have to tackle climate change.”

Emergency aid to help Canadians weather the pandemic has already pushed the federal deficit for this year up to an unheard-of $343 billion.

With the government operating on the assumption that the pandemic will continue to plague the globe for at least two more years, unprecedented amounts of red ink seem destined to continue flowing.

Finance Minister Chrystia Freeland said she’s “well aware” some people are concerned about the amount of debt the government is piling up. But she defended it, arguing “the best thing we can do for our economy is to keep coronavirus under control. I can’t emphasize that too much.”

She pointed out that 1.8 million Canadians are still unemployed or under-employed as a result of the pandemic and said the government is committed to getting them all back to work.

That said, Freeland said the government understands “the value of wise and prudent fiscal management.” She added that she has been talking “a lot” to Paul Martin, the former Liberal prime minister who tamed the federal deficit when he was finance minister in the 1990s.