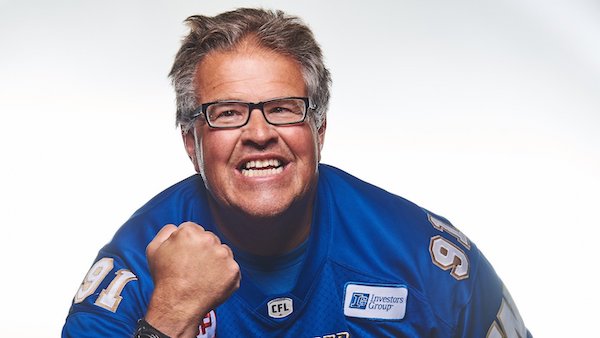 Winnipeg’s biggest sports fan is receiving a big honour for his volunteer work.

Gabriel Langlois, better known to Winnipeggers as Dancing Gabe, is among 10 recipients receiving the Sovereign’s Medal for Volunteers.

Gabe has been sharing his time at the St. Vital YMCA-YWCA daily for more than 30 years, assisting with the setup and takedown of the kids’ corner. He stepped up his efforts this year due to COVID-19, which shortened the seasons of many sports leagues. In the case of the Winnipeg Blue Bombers, the 2020 CFL season was completely scrapped.

Gabe is a beloved fixture at all Winnipeg sporting events since the 1980s, renowned for his dancing skills and his ability to rally the crowds and cheer for the home teams.

“I am so proud to have these Manitobans recognized nationally for their voluntary contributions within their communities and beyond,” said Lt.-Gov. Janice Filmon.

“From the smallest community to the heart of our largest city, Manitobans are known for giving so much of their time, talent and creativity to make a difference in the world around them.”

The Sovereign’s Medal for Volunteers is part of the Canadian Honours System, and serves to recognize exceptional volunteer achievements from across the country and abroad, encompassing a wide range of voluntary contributions.

The awards will be handed out during a ceremony later today at Government House.

Anderson spends many hours volunteering his time to organize and fundraise for a number of organizations including Rossbrook House, Siloam Mission, Project Neecheewam and South Indian Lake, where he fundraises and organizes the annual South Indian Lake Fun Day. He has worked tirelessly as a member of the Indigenous Advisory Council, where he has played an important role in Booth University College becoming culturally competent with Indigenous culture and truth and reconciliation goals. Anderson initiated and continues to raise funds for the Arnold Dysart Bursary, which is awarded to a South Indian Lake graduating student from Frontier Collegiate.

A volunteer coach with Hockey Manitoba for close to 20 years, Hall’s dedication has been instrumental in developing, training and guiding young athletes. He has also served on the board since 2011, allocating resources and improving safety standards through his roles as chair of minor hockey and president of Hockey Winnipeg.

For more than a decade, Hamm has volunteered with World Vision Winnipeg as an event representative, attending public engagement and fundraising events, supporting employees and fellow volunteers, and providing information about the organization. She has hosted visiting representatives at her home and represents the organization at events throughout the province

Since its inception in 2009, Kroeker has been a valued volunteer with Steinbach Community Outreach, helping low-income clients file their tax returns, and providing the organization with financial and technological assistance. He also serves as treasurer of Soups On Steinbach, and was a long-time board member of the Steinbach Mennonite Church.

An active member of Girl Guides of Canada since 2001, Laberge currently manages two different units and provides leadership as provincial commissioner for the Manitoba Council. Laberge also gives freely of her time to such organizations as the World Association of Girl Guides and Girl Scouts, the Winnipeg Fringe Festival and Operation Red Nose.

For more than a decade, Savard has been helping seniors get around with Le Chalet de La Broquerie. She is the president of Le Papier de chez nous, prepares meals for grieving families in the Paroisse St. Joachim and helps fund activities for seniors in her community with the Southern Health Centre.

Since 2017, Singh has been helping prepare meals for vulnerable, inner-city residents through Agape Table. She also volunteers her time and energy fundraising for girls’ education in India through Unique Home for Girls. As the co-founder of Langar Seva Winnipeg, she has provided 800 food-insecure people with free, healthy meals.

Thorne has been a dedicated volunteer with the Royal Canadian Legion for more than 22 years. She has spent countless hours helping to organize veterans’ luncheons for funerals and Remembrance Day, and regularly visits with ill members of the Salvation Army board of directors.

Worden has been contributing to the well-being of his community for over 30 years. In addition to organizing fundraisers with the Queens’ Own Cameron Highlanders of Canada to fund charitable activities, he is also helping to share the history of Scottish culture in Manitoba through his involvement with the Scottish Gentlemen’s Club.