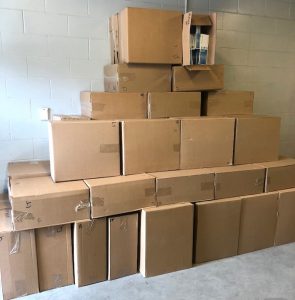 Officers also recovered a large number of stolen power tools believed to be stolen from within Brandon and the surrounding area.

Two of the original four suspects arrested in the original bust on September 9 face additional charges of possession of property obtained by crime and numerous charges in relation to the contraband tobacco.

Police also made a traffic stop on Highway 1 near 18th Street North on September 17, where 11 cases of unstamped cigarettes were recovered. Two men from Alberta were arrested and charged with several offences, including possessing more than 25 units of unmarked tobacco under the Tax Administration Act.

It’s unclear whether these two additional seizures are related to the 3.5 million cigarettes discovered earlier this month.

“The culmination of these investigations resulted in the seizure of over 4 million contraband cigarettes and approximately $50,000 worth of stolen property,” Brandon police said in a release.

“Police believe stolen property was being exchanged for the purchase of contraband cigarettes. Some of the stolen property has been identified and returned to the owners. Police continue to investigate the origin of the remaining stolen items.”