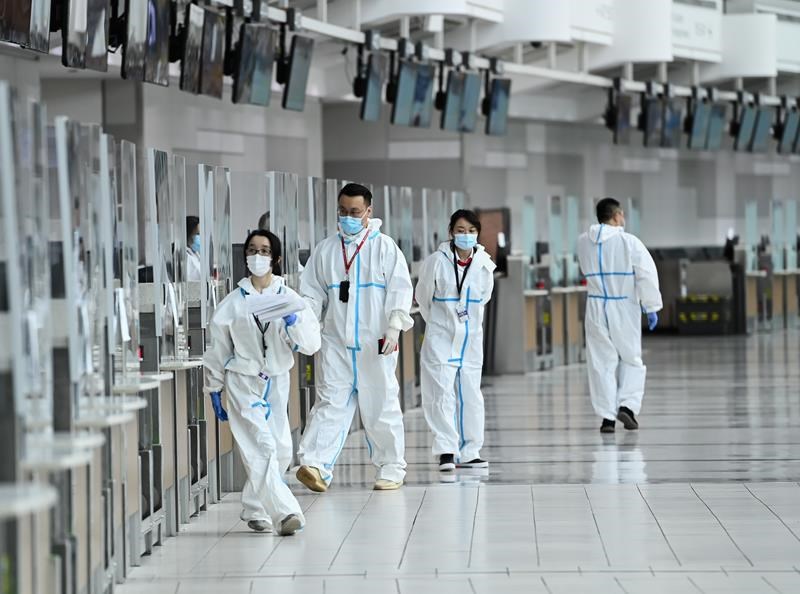 Workers mill about at a check-in counter at Pearson International airport during the COVID-19 pandemic in Toronto on Wednesday, Oct. 14, 2020. (THE CANADIAN PRESS/Nathan Denette)

OTTAWA — Airlines and travellers say a slew of questions remain about the federal government’s decision to require passengers returning to Canada to show negative results on COVID-19 tests taken abroad.

Transport Minister Marc Garneau announced last Thursday that air travellers overseas will have to present proof of a negative molecular test — known as a PCR test, conducted with a nasal swab — that was taken within 72 hours of departure, unless such testing is unavailable.

The Transport Department has yet to provide a list of foreign agencies whose tests are considered acceptable or to establish how airline employees should determine whether a test certificate is valid, said National Airlines Council of Canada chief executive Mike McNaney.

McNaney said the new rule, which mandates a 14-day quarantine in Canada regardless of the test result, will cause uncertainty and “frustration” for carriers and passengers alike.

“We’re very concerned about the confusion that’s going to occur and the disjointedness of implementation that’s going occur. And it all could have been avoided,” he said.

Air Transat vice-president Christophe Hennebelle says Ottawa announced the requirement, which takes effect this Thursday, without any prior consultation.

“It kind of came out of the blue … We had no advance notice,” he said.

“We feel that all that is a bit improvised … and basically the feeling we have behind that is that the government wants to stop travel but does not say it.”

Transport Canada did not immediately respond to questions Monday.

The rule comes as a devastated airline sector continues to bleed cash following a collapse in demand caused by the pandemic.

It also arrives amid growing criticism of the federal sick-leave benefit that pays $500 per week for up to two weeks to Canadians quarantined after touching down from abroad, including after vacations.

Some federal and provincial politicians are among those who chose to travel beyond Canada’s borders over the holidays, despite public health recommendations against non-essential travel.

As of 12:01 a.m. Thursday, travellers coming from countries where PCR testing is “unavailable” will be required to stay at a “designated quarantine facility” for two weeks upon arrival in Canada, rather than at home the way test-toting passengers can.

Whether “unavailable” means non-existent or simply hard to access is unclear, as is how passengers can prove the tests’ unavailability to a customer service agent at a check-in counter.

Co-ordinating a test with takeoff presents another potential hurdle.

For the past several months, major Canadian airlines have cancelled the majority of their flights several weeks in advance due to a lack of ticket purchases. That means passengers’ flights are often rescheduled days later, rendering any test taken 48 hours before the initially planned departure invalid for the rebooked flight.

“We have to scramble around. If the flight has changed it makes it worse, especially if we took the test,” said Perry Cohen, a 74-year-old Torontonian who spends roughly half the year in Florida.

“That’s not right. That’s not fair. It’s just going to aggravate people, and they’ve got enough stress with COVID. They don’t need this on their heads,” he said from a retirement community in Deerfield Beach, Fla., about 65 kilometres north of Miami.

“The 7th is not far away. And they didn’t even set the rules to the game yet.”