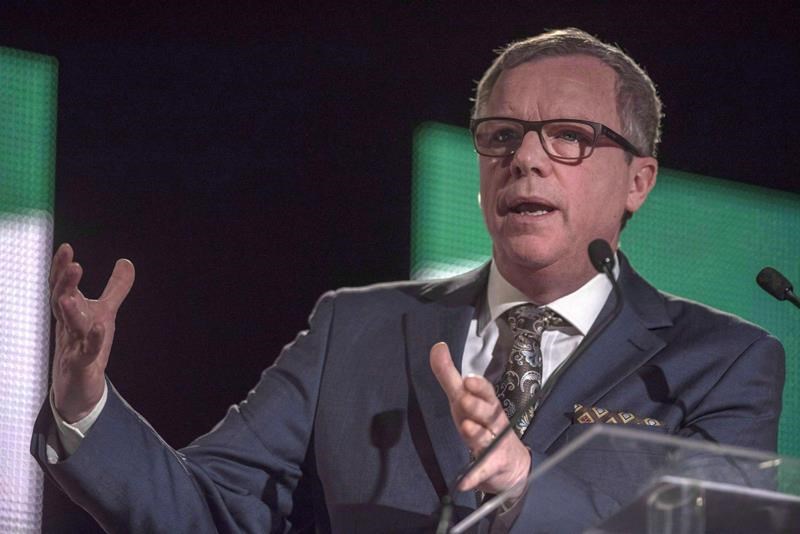 Former Saskatchewan premier Brad Wall speaks during the Saskatchewan Party leadership convention in Saskatoon on Saturday, Jan. 27, 2018. A review done by Wall of Manitoba Hydro says overly optimistic sales predictions and a lack of government oversight led to cost overruns and a large increase in debt at the Crown corporation. (THE CANADIAN PRESS/Liam Richards)

WINNIPEG — A review of Manitoba Hydro says overly optimistic sales predictions and a lack of government oversight led to cost overruns and a large increase in debt at the Crown corporation.

The review by former Saskatchewan premier Brad Wall looked at construction of the Bipole III transmission line and the Keeyask generating station, which ran a combined $3.7 billion over an initial budget.

Wall’s report says Manitoba Hydro officials and the former NDP government overestimated the potential for export sales needed to justify the projects at the time.

The report also says the former government did little to prevent costs from spiralling and was more focused on getting the projects completed.

The two projects were built over the last 15 years and Manitoba Hydro’s debt has tripled in that time to more than $23 billion.

The Crown corporation has applied to increase customer rates by up to eight per cent in recent years to pay down some of the debt, but provincial regulators have approved much lower increases.

Wall was commissioned by the province’s current Progressive Conservative government to conduct the review, which cost just under $1 million.

“The commissioner saw no evidence of interest or proactive outreach on the part of the former elected Government of Manitoba to provide oversight, accountability, and overall leadership on the Keeyask and Bipole III projects,” Wall’s report states.

“As the costs of the projects grew and the potential impact on Manitoba Hydro became apparent, there is no evidence that the former government engaged with the (Manitoba Hydro board) or provided any direction.”

When the former NDP government began pushing the projects, then-premier Gary Doer said hydroelectricity could do for Manitoba what oil had done for Alberta. But energy prices softened as the use of natural gas and fracking expanded in the United States.

In 2007, the government drove up the cost of the transmission line by ordering Manitoba Hydro to divert it through western Manitoba instead of running it straight down the east side of the province. The government said the move was necessary to protect pristine boreal forest in the east, respect Indigenous land use, and to avoid raising environmental concerns among potential U.S. customers.

That move, Wall said, resulted in a longer and more expensive transmission line and power loss along such a great distance.

There is some evidence that the eastern route could have avoided up to $1 billion in additional costs, Wall added.

Wall’s report makes many recommendations, including greater oversight by the provincial cabinet of major projects at Manitoba Hydro.