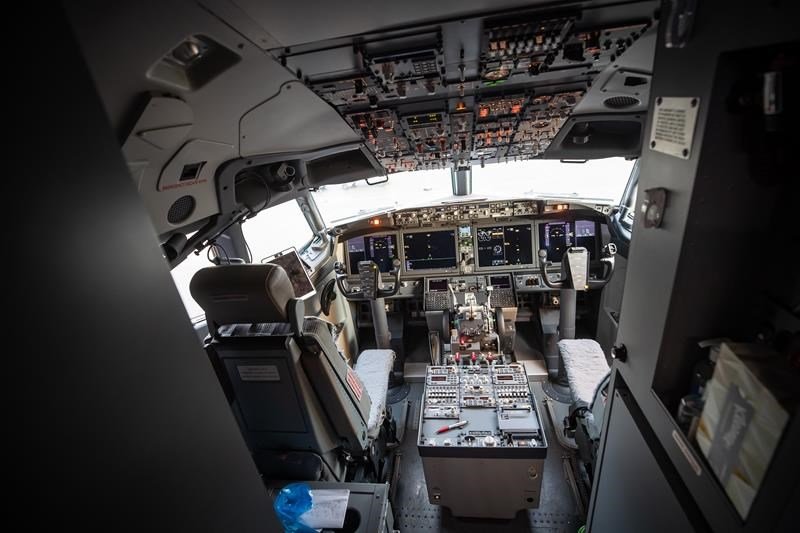 The flight deck of a WestJet Airlines Boeing 737 Max aircraft is seen after arriving at Vancouver International Airport in Richmond, B.C., on Thursday, January 21, 2021. (THE CANADIAN PRESS/Darryl Dyck)

In a study released Wednesday, the House of Commons transport committee recommended Transport Canada conduct a full recertification for any flight system that tacks on a new or altered component — like the one involved in the fatally defective Max 8.

The 14 recommendations also say the department should consider incorporating pilots into aircraft certification and take a more skeptical approach to planes validated by the U.S. Federal Aviation Administration, pursuing further technical assessment even after a green light from the FAA.

Despite testimony from officials affirming the rigour of Canada’s validation process, the report says many witnesses suggested Transport Canada is “overly reliant” on the FAA and other foreign authorities, “raising concerns of ‘rubber stamping'” amid findings that some safety reviews were effectively outsourced to Boeing.

“The committee heard numerous concerns regarding the involvement of manufacturers in the certification process and the possibility of industry pressure on Transport Canada as the regulator,” the report states.

In January, Transport Canada approved the return of the 737 Max after its grounding in 2019 and months subsequently spent poring over changes to the plane, which contained critical flaws in its MCAS anti-stall system that could plunge it into a nosedive if a sensor failed.

The faulty system was implicated in the two Max 8 crashes in Indonesia and Ethiopia in October 2018 and March 2019 respectively, killing a total of 346 people on board, including 18 Canadians.

The Canadians were on board Ethiopian Airlines Flight 302, which plummeted to the ground six minutes after taking off from Addis Ababa.

The study also recommended more consultation with cabin crew representatives during certification, stronger collaboration with air safety authorities abroad, re-establishing an aviation regulatory council as a joint government-industry-labour review panel, and a report from Transport Canada on “lessons learned” from the 737 Max groundings.