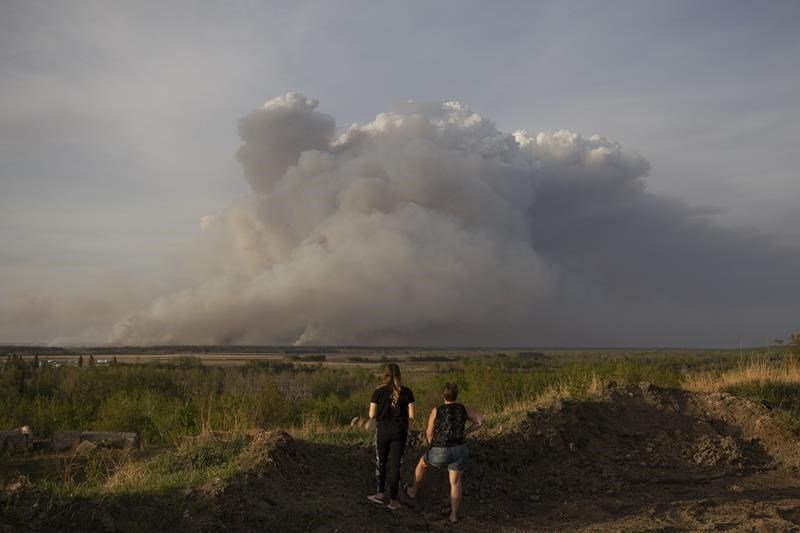 Residents of Prince Albert watch a plume of smoke rise from a forest fire burning northeast of the city in Prince Albert, Sask., Monday, May 17, 2021. (THE CANADIAN PRESS/Kayle Neis)

WINNIPEG — By the time Virginia Thomas left her home community of Bloodvein First Nation in eastern Manitoba on Monday evening, a nearby wildfire had made it to the main road.

Thomas was part of a group of about 150 people who were transported out of the community to Winnipeg, about 250 kilometres away, due to wildfires and smoke.

Since arriving in Winnipeg, Thomas said she has been helping to co-ordinate accommodations for members while they are in the city and is doing the same for the remaining 900 people who had to leave their homes Tuesday.

“This is the first time Bloodvein experienced anything like that,” she said in an interview. “We’re trying our best to keep our people comfortable while they’re here.”

Four First Nations in Manitoba have been evacuated due to wildfires in the eastern part of the province.

More than 1,300 people from Pauingassi, Little Grand Rapids, Bloodvein and Berens River First Nations have been sent to Winnipeg and Brandon with the help of the Canadian Red Cross.

The Red Cross said a full evacuation of Pauingassi and Little Grand Rapids was completed Monday, while similar efforts in Bloodvein and Berens River would continue for the rest of the week until everyone has left the communities.

“As it stands there hasn’t been any issues with (Pauingassi and Little Grand Rapids). Everybody’s out and safe and sound,” said Jason Small, communications manager for the Red Cross in Manitoba.

There were 130 fires burning in the province on Tuesday after weeks of hot, dry weather. About two dozen were considered out of control.

The fires also contributed to smoky conditions throughout Manitoba and Saskatchewan.

Environment Canada issued alerts for much of both provinces, noting smoke from wildfires across the Prairies was producing poor air quality in that area.

Thomas said community members are worried about how the fires and smoke will affect the land and animals.

“To think about the animals suffering in the smoke, that really touches us as Anishinaabe people. That is our strength, we learn from those animals,” she said. “It’s been very emotional for us.”

A number of grassroots organizations known as “the village” have volunteered their services to help the Red Cross and evacuees.

Jackie Anderson, the group’s community evacuation response manager, said they had a few days notice about the possibility so she quickly hired 24 staff to plan activities for families.

The group has planned outdoor activities — including a concert and cultural events — to help with the isolation.

About 20 members from CommUnity 204, a Winnipeg-based volunteer group, are providing mental health support as well as traditional teachings and medicines for evacuees, Daniel Hidalgo, the group’s co-founder, said in an interview.

Hidalgo added that two members are fluent in Ojibwa, which has been important in relaying information to residents during a time of uncertainty.

“That’s been a huge factor in just calming people down and giving them a sense of familiarity,” he said. “A lot of them just need the reassurance that things are going to be OK.”