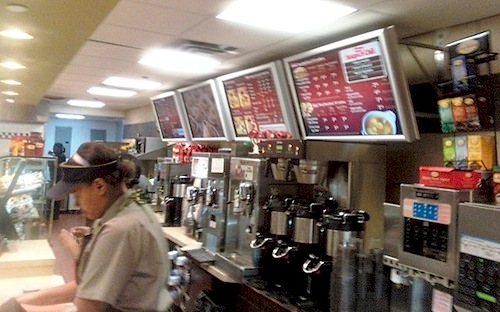 You’re not in the bizarro world if you don’t recognize the menu boards, it’s just Tim Hortons’ New York City location. Blogger Dave Haynes pointed out the digital boards in the popular Canadian coffee chain’s outlet at Penn Station, which appear to be video.

After doing a bit more research into these new menu displays, head office can apparently change the menus at all of its locations at once without having to get on-site staff to do it.

As far as we know, Winnipeg doesn’t have these menus yet, although there are video screens in several locations throughout the city that display specials and promotions.

Can I get some more pixels with that double-double?