If you search for Michelle Obama on Google Image Search, the first result that pops up isn’t too flattering. 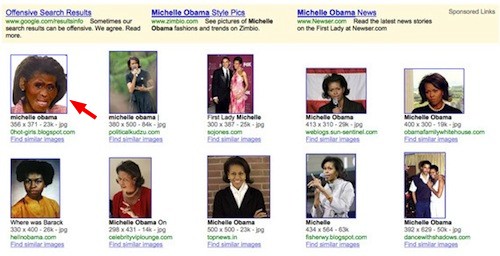 In fact, so much fuss has been made about the image — which is a cross between the First Lady and a monkey — Google has taken out an ad explaining how images rank in their results. They explain how search results are presented based on a site’s ranking and how authoritative it is. Google had previously removed the image from their results when it was hosted on another site, because it “violated Google’s guidelines by serving malware to visitors.” Those who know a little SEO (search engine optimization) can sometimes tweak a listing in their site’s favour to rank higher in Google than others. A few years ago, searching for “miserable failure” brought up the official White House website for former President George W. Bush. Google fixed that problem.

UPDATE: The image has since been removed.

— With files from SearchEngineLand.com