Doc Walker Heading to the Olympics 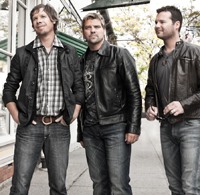 Manitoba boys Doc Walker have a pretty big gig lined up for next year — the Vancouver 2010 Olympic Winter Games.

The band will perform at Olympic Torch Runs on January 5 in Winnipeg and in their hometown of Portage la Prairie on January 7.

They are also slated to perform on February 25 as part of Manitoba Day at B.C. Place. Burton Cummings will also perform that day.

From there, Doc Walker heads to Surrey, B.C. on February 26 to play at the 2010 Celebration Site, a 13-day festival at Holland Park.

Thanks to Troy Scott