Home » Columns » Currie: Will Somebody Scoop Up Canada’s Rarest Hotels?

Currie: Will Somebody Scoop Up Canada’s Rarest Hotels? 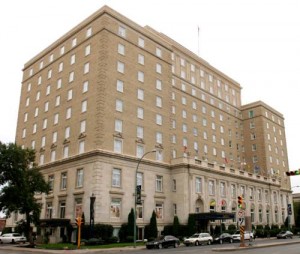 Staying in a hotel has seldom been less than a pleasant adventure for me. For many years I did not hesitate to identify the Hotel Saskatchewan in Regina as my all-time favourite. If I had to name a second favourite, it would likely be the Algonquin in the Big Apple, or the Grand in Toronto. But in 1962, just as I was entering high school, the Saskatchewan became the first hotel where I had my very own room. I’ve stayed there a number of times since while attending the Labour Day Classic between the Roughriders and the Blue Bombers.

It is still referred to by locals simply as the Hotel. Built by Canadian Pacific, not long before the economic collapse that began in 1929, the railway owned it for more than 50 years. For the past 30 years the Saskatchewan has been more of a trading commodity than anything else it seems.

Eighteen months ago it was bought by Temple Hotels, based in Winnipeg, for $32 million. Temple made a vague commitment to spend millions on needed renovations. In fact, when I last visited a few months ago, it was evident that they had spent next to nothing. It appears they only bought the grand lady to flip her. This week Temple sold the hotel, for $37 million, to a Toronto-based outfit called InnVest REIT. A $5 million profit for doing next to nothing.

None of the major hotel companies in Canada are based in the west, and historic properties like Winnipeg’s Hotel Fort Garry are becoming rare treasures indeed. The Fort Garry, built by the Grand Trunk Railway in 1913, has been owned in recent years by Ida Albo and her husband Rick Bell. Unlike what’s happened with the Saskatchewan, the local Winnipeg owners have given the building the kind of love and attention that’s needed to keeps visitors coming back.

Can we not find a genuine lifelong fan of the green and white, with deep pockets, to buy Regina’s treasure?